Note: The Estuary Protection and Restoration problem statement, hypothesis and recommended actions made in the 1995 Spirit of the Salmon Plan remain relevant and applicable. Also see Reductions in the Available Habitat: Estuary Habitat in the 1995 Plan.

The Columbia River estuary, the tidally influenced area that forms the border between Oregon and Washington, extends from the river’s plume upstream 146 miles to Bonneville Dam. The 1995 Plan describes the biological function of the Columbia River estuary and the degradation and diminishment that began with accelerated human development in the decades following the treaties of 1855.

A study by the U.S. Environmental Protection Agency in 2007 (Hayslip et al.) concluded that the lower Columbia River estuary’s overall ecological condition was only fair, while conditions in particular estuarine areas were poor. More recently the National Marine Fisheries Service (NMFS) declared estuary degradation a “key limiting factor” to the recovery of salmonids (2011).

A 2013 analysis compared the land cover data for 2010 to GIS interpretations of the late-1800s pre-development survey maps; the comparison showed a 70% loss of vegetated tidal wetlands and 55% of forest uplands (Corbett 2013 and cited in NMFS 2013).

Recent studies (Bottom et al. 2008) confirmed that the estuary is essential habitat for salmon and that salmon select for shallow wetland habitats in the estuary to feed and avoid predators as they prepare to enter the ocean. Similarly, Pacific lamprey depend on the estuary during juvenile rearing and migration life stages (CRITFC 2011).

Between 2005 and 2010, the U.S. Army Corps of Engineers dredged the riverbed to create a 43-foot deep shipping channel over 130 miles from the mouth to the ports of Portland, Oregon, and Vancouver, Washington. This, together with many previous dredging projects, created sandy islands that support unnaturally large flocks of predatory birds, such as Caspian terns and double-crested cormorants. These birds feed on outmigrating smolts and represent a threat to salmon recovery in the estuary (Evans et al. 2012).

Regional scientists have developed new predictive methods, data and other scientific tools that are yielding improved an understanding of the estuarine and nearshore marine areas (Columbia River Estuary Conference 2012).

Emerging research on toxic contamination describes toxic pollutants in the estuary and their lethal and sublethal effects on salmonids (Sethajintanin 2004, Sloan 2009, Yanagida 2011, Johnson 2013).

Another new and pressing concern for the estuary involves potential impacts from climate change. Effects of climate change, such as changes in flow, spring freshet, and water temperatures, have the potential to deplete available rearing habitat. Other changes include rising tidal influences, increased salinity, and more invasive species.

In addition, changes to river flow stemming from negotiations within the Columbia River Treaty process could have huge impacts on habitat. Reestablishing sustained peak flows could aid river and estuarine processes that would stimulate similar sediment transport in the rivers and sediment plumes in the estuary that occurred historically.

The proliferation and impact of non-native species (aquatic and avian) and continued maintenance dredging are threats that require more attention in terms of both research and preventive and remedial action than is currently being given to them. See the new technical recommendation Invasive Species.

With the 2009 establishment of the Lower Columbia River Estuary Program and the 2011 NMFS Columbia River Estuary ESA Recovery Plan, the institutional framework for protecting and restoring the estuary is coming into place. The Federal Emergency Management Administration’s recent policy on national flood insurance could limit additional damage from floodplain development (FEMA 2012). Funding for estuary work, as described in the updated Water Quality (Toxic Contamination) recommendation, continues to be an outstanding problem. 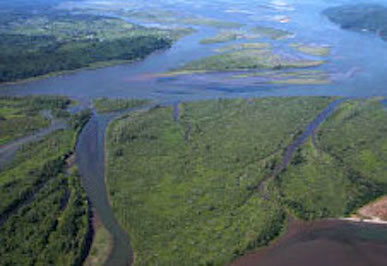 « Previous:Juvenile Salmon Passage
Next: Ocean Harvest »
Back to Top