The Clearwater subbasin is one of the most biologically rich and diverse drainages in the Columbia Basin. Encompassing more than 9,600 miles2 (24,900 km2) of north-central Idaho, it is home to more than 30 species of fish, 19 of which are native, and is inhabited by as many as 340 terrestrial wildlife species. The Clearwater subbasin is bordered to the north by the St. Joe subbasin, to the south by the Salmon River subbasin, to the east by Montana, and it joins the Snake River in the west. The Lochsa, Selway, South Fork, and North Fork Clearwater rivers represent the primary tributaries in the subbasin. All but the North Fork Clearwater River are unregulated. The mouth of the Clearwater is located on the Washington–Idaho border at the town of Lewiston, Idaho where it enters the Snake River 139 river miles (224 km) upstream of the Columbia River.

Although drier and colder in the high elevation and southernmost portions of the subbasin, the climate is strongly influenced by warm, moist maritime air masses from the Pacific. A general increase in precipitation from west to east across the subbasin occurs coincident with increasing elevations, resulting in greater precipitation in the mountainous terrain in the eastern half of the subbasin compared to the low elevation canyons and plateaus to the west. Mean annual precipitation ranges from 12 inches (310 mm) at the Clearwater River’s confluence with the Snake River to greater than 90 inches (2,000 mm) in the higher elevations.

Climate, along with oceanic, tectonic, and volcanic forces, has helped shape the largely erosional character of the granitic batholith, which underlies vast portions of the subbasin. Mass wasting processes of erosion are common throughout the highly precipitous terrain in the central and eastern portions of the subbasin, as are processes of surface, rill, and gully erosion in the fertile loess soils common to the western prairie region.

Unlike many other inland west subbasins, over 70% (more than four million acres) of the Clearwater is comprised of forested communities. The Clearwater also contains several unique or disproportionately important plant communities. Most notable are the prairie grasslands in the western portion, wetland and riparian areas in valley bottoms, and coastal disjunct communities within the North Fork Clearwater and Selway/Lochsa confluence.

Roughly two-thirds of the subbasin is federally managed, while the remainder is privately owned. The U.S. Forest Service manages most of the forested land within the Clearwater (over 3.5 million acres), but the state of Idaho, Potlatch Corporation and Plum Creek Timber Company also own extensive forested tracts. The western half of the subbasin is generally in the private ownership of small forest landowners and timber companies, as well as farming and ranching families and companies. Nez Perce Tribal lands are located within or adjacent to Lewis, Nez Perce, and Idaho Counties.

The Clearwater and Nez Perce National Forests contain some of the last significant spans of roadless terrain and wild fish habitat in the lower forty-eight states, and support a number of threatened and endangered plant and wildlife species. Approximately 47% of the Clearwater subbasin is designated as having some degree of protected status, the majority of which is either inventoried roadless or wilderness area. Portions of the Selway-Bitterroot and Gospel Hump Wilderness exist within the Clearwater subbasin, contributing substantially to the total protected area.

Various ‘focal’ plant and animal species occur in the subbasin. These organisms often serve as indicators of the biological health of the ecosystem, as their presence, absence, or relative abundance is typically dependent upon the condition of an undisturbed, or in some cases, disturbed environment. The requirements of these focal species are such that if their basic needs are met then most other species will have their requirements met as well. The species with the most demanding requirements are usually selected to define the minimum acceptable values for each landscape parameter. This process was applied to the key habitat attributes in the Clearwater subbasin and a list of focal plant, animal, and fish species developed. Selected focal fish species in the Clearwater include chinook salmon (Oncorhynchus tshawytscha), steelhead trout (Oncorhynchus mykiss subspecies), westslope cutthroat trout (Oncorhynchus clarki lewisi), bull trout (Salvelinus confluentus), brook trout (Salvelinus fontinalis). 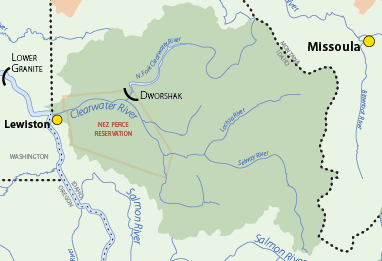 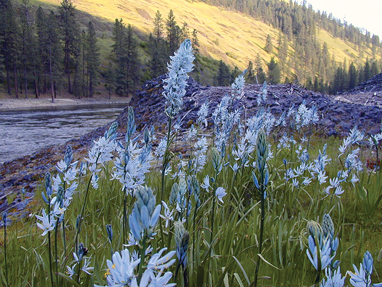