The Umatilla/Willow subbasin is one of ten subbasins grouped in the Columbian Plateau ecological province, which is the largest of the 11 ecological provinces. Because subbasins in the Columbia Plateau province are grouped together based on similarities in climate and geology, the Umatilla/Willow subbasin and most other subbasins in the province were historically dominated by interior grasslands and/or shrub-steppe habitats, are currently dominated by agricultural lands, have low human population densities, and have large portions of land in private ownership. The importance of agriculture and the arid nature of the area also results in a problem common in most other subbasins in the province: water is over-appropriated and is required for multiple, sometimes competing purposes. Like most other subbasins in the province wildland recreation, including fishing, hunting, boating, and hiking, is also an important component of the economy and culture of the Umatilla/Willow subbasin.

Although the Umatilla/Willow subbasin is similar in many ways with the other subbasins in the province, it is unique in other ways. Perhaps most notable is the way in which stakeholders in the Umatilla/Willow subbasin with different interests have worked together to improve fish habitat in the Umatilla River through the Umatilla Basin Project, as describe above. The subbasin is also unique in other ways related to water resources and the presence of salmonid species. Extirpated Chinook and coho salmon have been reintroduced to the subbasin, and their production, as well as steelhead production, has been increased through hatchery supplementation. Natural production of steelhead is increasing as well; returns of Middle Columbia River ESU natural summer steelhead adults are increasing more rapidly in the Umatilla River than in the Walla Walla or John Day subbasins. The Umatilla/Willow subbasin also provides important habitat for many salmonids. Although the subbasin contains only about 1.5% of all the river miles in the U.S. portion of the Columbia basin and 6% of all the river miles in the Columbia Plateau province, it provides a disproportionate amount of salmonid habitat.

The terrestrial environment in the Umatilla/Willow subbasin is also unique in that it contains some of the largest remaining tracts of shrub-steppe habitat in the Columbia Plateau in Oregon.

Environmental conditions external to the Umatilla/Willow subbasin impact both fish and wildlife species in the subbasin. Anadromous fish leaving the subbasin as juveniles and returning as adults are affected by multiple aspects of the aquatic environments they encounter in that journey, including three major dams on the Columbia River, and variable estuary and ocean conditions. Passage barriers, poor water quality, flow issues, and predation are some of the obstacles facing these fish outside the subbasin. In addition, salmon and steelhead abundances are influenced strongly by ocean conditions including the PDO. Likewise, highly mobile terrestrial wildlife species are also affected by out-of-subbasin conditions. These may range from problems such as loss of habitat connectivity in adjacent subbasins to deforestation of wintering habitat in South America.

Summary of the Management Plan

The management plan for the Umatilla/Willow subbasin begins with a vision statement, which describes the desired future condition of the subbasin and reflects the current conditions, values, and priorities of the subbasin in a manner that is consistent with the Council’s vision described for the Columbia basin. The following vision statement for the Umatilla/Willow subbasin was adopted by the Core Partnership on November 6, 2003 and was presented and approved at a public meeting on November 12, 2003.

The vision for the Umatilla/Willow subbasin is a healthy ecosystem with abundant, productive, viable, and diverse populations of aquatic and terrestrial species, which will support sustainable resource-based activities that contribute to the social, cultural, and economic well-being of the communities within the subbasin and the Pacific Northwest.

This vision entails several broad goals for the subbasin that can be categorized as human use; habitat; population; and research, monitoring, and evaluation goals.

The development of objectives and strategies for the subbasin’s aquatic and terrestrial wildlife management plan was driven by the vision, the current biological and ecological conditions in the subbasin, and the economic and social realities described in the assessment. The biological objectives describe the physical and biological changes within the subbasin needed to achieve the vision. When forming aquatic and wildlife biological objectives and strategies, subbasin planners worked to satisfy the criteria set forth by the Council (2001) in its Technical Guide to Subbasin Planners and to ensure consistency of the plan with the requirements of the Endangered Species Act and the Clean Water Act. 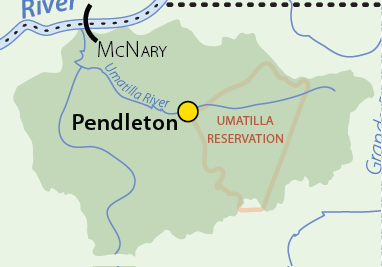 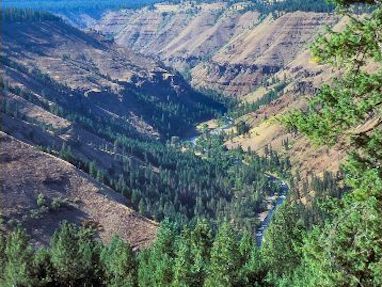 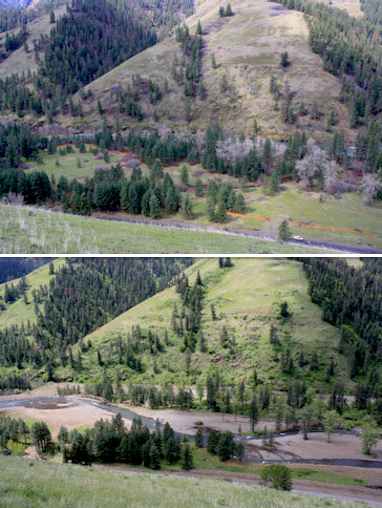 [top] Meacham Creek, a tributary of the Umatilla River, had been straightened and confined in a narrow bed. [bottom] The Umatilla Tribe removed the confinement barriers, allowing the creek to occupy its historical floodplain and establish natural meanders.

[top] Meacham Creek, a tributary of the Umatilla River, had been straightened and confined in a narrow bed. [bottom] The Umatilla Tribe removed the confinement barriers, allowing the creek to occupy its historical floodplain and establish natural meanders.