The Deschutes Subbasin Plan shares the vision and cooperation of numerous people who are committed to restoring and/or sustaining healthy fish, wildlife and plant communities, water quality and instream flows in the Deschutes watershed. Many stakeholders took an active role in its formation including fish and wildlife managers, tribes, governmental agencies and citizens. This wide involvement reflects the foundation of the planning process ― that the responsibility of subbasin planning ultimately lies with the people of the Deschutes Subbasin.

The Deschutes Subbasin Plan will ultimately be adopted as part of the Northwest Power and Conservation Council’s Columbia River Basin Fish and Wildlife Program. It and similar plans for other Columbia River subbasins that were prepared through the Council’s Fish and Wildlife Program, will help direct Bonneville Power Administration funding of projects that protect, mitigate and enhance fish and wildlife that have been adversely impacted by the development and operation of the Columbia River hydropower system. The Council, Bonneville, NOAA Fisheries, and U.S. Fish and Wildlife Service will use adopted subbasin plans to help meet the requirements of the 2000 Federal Columbia River Power System Biological Opinion. NOAA Fisheries and USFWS will also use the plans as building blocks for recovery planning for threatened and endangered species.

The foundation of the Deschutes Subbasin Plan is the belief that the physical and cultural environments of the Deschutes Subbasin ― and larger Columbia River Basin ― control the distribution, composition, and structure of fish and wildlife communities and populations in the watershed. These environments extend beyond the banks of the Deschutes River and tributaries, and reach from ridge top-to-ridge top. Consequently, strategies are designed to protect and restore the functions of natural processes within the subbasin. They include direction to protect, restore and expand core production areas for focal fish and wildlife species in the watershed. Strategies focus on restoring and reconnecting fragmented stream reaches; increasing instream flows and returning seasonal flows to more natural flow regimes; restoring overall watershed health to increase water infiltration, retention and permeability rates, and soil stability; and protecting existing critical habitats that currently provide high quality habitat conditions.

The Deschutes Subbasin Plan consists of three parts: 1) The Assessment forms the scientific and technical foundation for development of the Deschutes Subbasin vision, objectives and strategies; 2) The Inventory summarizes fish and wildlife protection, restoration and artificial production activities and programs that have already occurred in the subbasin or are currently being implemented; 3) The Management Plan ― the heart of the subbasin plan ― defines the environmental and biological vision, objectives and strategies specific to fish and wildlife within the Deschutes Subbasin. The management plan has a 25-year planning horizon. It includes direction for research, monitoring and evaluation.

The development of the subbasin plan will be iterative. The plan is a living document and will be updated and refined through adaptive management, research and evaluation. It will be maintained to reflect new direction of other agencies and stakeholders. Information and direction in the subbasin plan will be revisited and updated through the Northwest Power and Conservation Council’s Rolling Provincial Review Process once every three years.

The Deschutes Subbasin stretches over 10,700 square miles of land in central Oregon. Covering eleven percent of Oregon’s land area, the Deschutes River subbasin is larger than other Oregon watersheds, except the Willamette. The subbasin extends west to the crest of the Cascade Mountains, south to lava plateaus, east into the Ochoco Mountains and to the plateau between the Deschutes and John Day Rivers, and north to its confluence with the Columbia River. Its length reaches 170 air miles from peaks in the Cascade Mountains to where it joins the Columbia River, 205 miles from the Pacific Ocean. In width, it extends up to 125 miles from the eastern slopes of the Cascades to the western slopes of the Ochoco Mountains, and over the high desert landscape that covers much of the subbasin’s interior.

The headwaters of the Deschutes River and most major tributaries receive large amounts of precipitation, but much of the subbasin lies in the rain shadow of the Cascade Mountains and is sheltered from western Oregon’s heavy rainfall. Average annual precipitation amounts to more than 100 inches on the eastern slopes of the Cascades, mostly as snow, but drops to only 40 inches in the Ochoco Mountains and 10 inches at lower central locations.

Land ownership in the Deschutes Subbasin is about 51 percent public, 7 percent Tribal, and 42 percent private. The federal government owns and manages most public land in the subbasin, including three national forests, one national grassland and one Bureau of Land Management District. Most of the public land lies in the upper watershed. Lands of the Warm Springs Tribal Reservation extend over approximately 641,000 acres and lie mostly in the lower Deschutes River subbasin. Lands in private ownership cover much of the lower and interior of the subbasin. Many of these private lands support agricultural, forest and range uses. 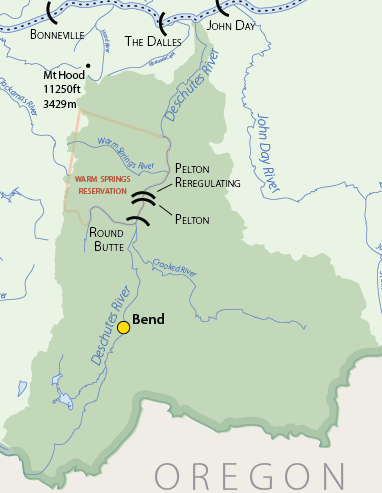 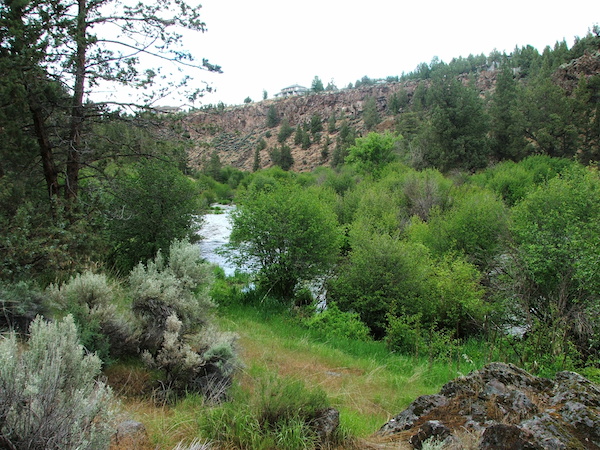