The Yakima River basin is located in south central Washington and contains a diverse landscape of rivers, ridges, and mountains totaling just over 6,100 square miles. Along the western portion of the basin, the glaciated peaks and deep valleys of the Cascade Mountains exceed 8,000 feet. East and south from the Cascade crest, the elevation decreases to the broad valleys and the lowlands of the Columbia Plateau. The lowest elevation in the basin is 340 feet at the confluence of the Yakima and Columbia Rivers at Richland. Precipitation is highly variable across the basin, ranging from approximately 7 inches per year in the eastern portion to over 140 inches per year near the crest of the Cascades. Total runoff from the basin averages approximately 3.4 million acre-feet per year, ranging from a low of 1.5 to a high of 5.6 million acre-feet.

The aquatic technical committee identified a number of fish species and stocks that potentially warranted consideration as focal species for subbasin planning purposes. An initial list of eight species/stocks was evaluated by the Yakima Subbasin Fish and Wildlife Planning Board and later narrowed to six species.

Yakima Basin bull trout populations were listed as threatened under the ESA, effective 10 July 1998. Nine distinct bull trout stocks have been identified in the Yakima Basin by WDFW. Of these nine stocks, six are classified as “Critical,” one as “Depressed,” one as “Healthy,” and one as “Unknown”.

Fall chinook populations have also been dramatically reduced from pre-1850s abundance levels. There are two genetically distinct stocks recognized in the Yakima Basin. The mainstem stock is found throughout the lower Yakima River (roughly the lower 100 miles), and a stock is endemic to the Marion Drain, a man-made drainage ditch for the Wapato Irrigation Project (WIP). Environmental conditions have changed since the early 1930s, which has resulted in decreased production of fall chinook and a shift in juvenile out-migration shifting to earlier in the year.

Steelhead and rainbow trout are widely but thinly distributed across the Yakima Basin and have been dramatically reduced from pre-1850s abundance levels. Yakima Basin steelhead were listed as threatened under the ESA, effective 24 May 1999. Production of steelhead within the Yakima Basin is heavily weighted towards Satus and Toppenish Creeks, which have healthy populations. Anadromy in rainbow trout populations, and the overall size of the population in the Upper Yakima River is presently much decreased from historic levels.

The historical total run size of Yakima River sockeye salmon has been estimated at either 100,000 or 200,000. Sockeye were extirpated following the completion of impassible storage dams below all natural rearing lakes in the late teens and early 1920s. Because sockeye salmon were extirpated from the Yakima Subbasin so long ago, little is known about genetic or life history variation that may have occurred in individual stocks or populations.

Pacific lamprey, once an important food source for Native Americans in the subbasin, is a Washington State species of concern and is under consideration for ESA listing by USFWS. They are currently found in the mainstem Yakima and Naches Rivers, but fewer than 15 have been observed in the Yakima system since 1992.

The loss of floodplain habitat, especially side channels and springs adjacent to the mainstem Naches and Yakima rivers, were identified as a significant limiting factor for the productivity of aquatic habitat in the subbasin. Actions to reverse this habitat loss are to relocate infrastructure (where possible) to allow natural processes to operate and reconnection of side channels by removal of obstructions. Artificial channels should be constructed where current conditions allow.

Riparian zone (the area adjacent to the river which is influenced by the river itself) problems include lack of shade and large woody debris (LWD), bank instability, and the inability of black cottonwood to reproduce under existing flow regimes. The Subbasin Plan calls for restoration of riparian zones and reduction of chronic bed instability through revegetation, introduction of LWD, protection of riparian areas by purchase or easement, improved riparian area management, and restoration of natural flow regime.

The presence of reservoirs in the system has reduced peak flows and may have either increased or decreased energy available for sediment transport. The effect the natural glacial lakes had on flow and other attributes such as temperature is not well understood, and therefore we do not have accurate guides to pre-1850s conditions. Characterizations of the pre-1850s flow regimes are important for evaluation of how system function has changed, and how those changes have affected fish and wildlife populations. An objective is to find or create a new model to simulate the physical, chemical, thermal effects of lakes in the pre-1850s environment so that we can better understand the difference between current conditions and conditions that existed before the lakes were dammed.

Altered flows of water, sediment and water temperature changes (mostly summer increases) severely reduce the quantity and quality of aquatic habitats. The Plan contains objectives to replicate basin wide temperature variability by returning the timing and quantity of river flow to a more natural state. This restoration of a normative flow regime can be accomplished by the purchase, transfer, or lease of water rights; changes in flow management, conservation; and increased natural and artificial storage.

There is a high predation risk for juvenile salmonids in the Subbasin. To reduce the effect of elevated predation it is recommended to increase the number of spawning fish in the Yakima Subbasin, reduce populations of smallmouth bass in the lower Yakima River, improve cover and off channel habitats, and implement further control on predator populations in mainstem reservoirs.

Passage barriers and unscreened diversions and pumps have significant negative effects on salmon productivity. Related objectives of the plan are to improve passage and design of irrigation diversions to allow fish and sediment to pass through diversion points. The strategies recommended are to reduce or eliminate operational spill to tributaries during migration periods, increase irrigation efficiency, relocate or consolidate existing structures, replace or rebuild existing diversion dams, move or consolidate diversions, and provide pump screens to landowners.

Kachess, Kecheelus, Cle Elum and Bumping Dams block passage for sockeye and bull trout and Tieton Dam blocks passage for bull trout. A high priority objective is to restore passage to at least one dam by 2007, possibly through various fish passage options such as ladders, trap and haul, and modification of outlets for downstream passage.

Spring chinook populations have been dramatically reduced from pre-1850s abundance levels. An important objective in the plan is to restore spring chinook population abundance, productivity and spatial distribution to viable, harvestable and sustainable levels over the next 30 years. This will require research on habitat restoration and population management activities such as harvest management and hatchery supplementation. Habitat improvements, especially side channel reconnection, should be concentrated in middle and lower alluvial floodplains

Fall chinook populations have been dramatically reduced from pre-1850s abundance levels. To increase Tribal and sport harvest opportunities there should be an annual release of 1.8 million out-of-basin acclimated hatchery smolt releases from the Prosser Hatchery.

Extirpation of sockeye salmon from the Yakima Subbasin has reduced the productivity of the watershed and ecosystem as a whole, and eliminated a significant source of commercial and subsistence harvest. The Plan contains an Objective to reintroduce sockeye to two reservoir systems by 2015, and to establish self-sustaining populations by 2030. The first steps are to study the feasibility of this objective and perform initial studies on closely related sockeye stocks. This will also require study of the potential to establish passage at the dams, and the development of appropriate broodstock with which to establish the population.

Steelhead populations have been reduced from pre-1850s abundance levels because of habitat loss and alteration and changes in the biotic community. These factors have reduced habitat suitability, which in turn has reduced productivity, abundance, and spatial distribution of the species. To increase the abundance, productivity, and genetic diversity (and therefore stability), of the species it is recommended to increase distribution of healthy steelhead populations in areas that are currently suitable but inaccessible, such as Cowiche Creek and possibly Taneum Creek, and improve habitat in those areas currently accessible but of low quality. Steelhead population should be monitored for abundance, distribution, and genetic diversity.

Steelhead abundance and productivity have also been reduced due to a severe reduction in repeat spawning. To increase the number of repeat spawning steelhead in Yakima Subbasin, collect spawned out steelhead kelts and 1) recondition these kelts for release in the subbasin for natural spawning, and/or 2) transport kelts below the Columbia River dams to increase repeat spawning.

Population levels of Pacific lamprey have been dramatically reduced from pre-1850s levels. Improve passage and study specific habitat relationships for lamprey. Management of reservoir water levels can create obstructions to tributary access for bull trout spawning migrations. The plan objective is to allow unimpeded access of bull trout to spawning areas. It will be necessary to study methods for the construction of permanent channels or paths and monitoring of conditions so that migration can be maintained. In the short term, trapping and hauling of spawning bull trout may be beneficial.

Bull trout have reduced population viability due to competition and interbreeding with brook trout. The plan recommends eliminating brook trout from presently occupied or suitable bull trout habitat and the termination of brook trout stocking within the subbasin. 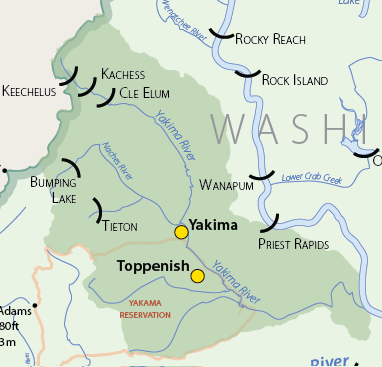 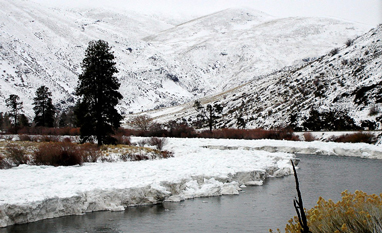