The Klickitat Subbasin management plan – along with the supporting assessment and inventory – – is one of nearly 60 management plans currently being developed throughout the Columbia River Basin for the Northwest Power and Conservation Council (NPCC). This subbasin plan was crafted by the same team that is currently working on the Lower Middle Mainstem (including Rock Creek) and Big White Salmon subbasins, and thus has many elements in common with those plans. The plans will be reviewed and adopted as part of the NPCC’s Columbia River Basin Fish and Wildlife Program. They will help prioritize the spending of Bonneville Power Administration (BPA) funding for projects that protect, mitigate and enhance fish and wildlife that have been adversely impacted by the development and operation of the Columbia River hydropower system.

The primary goal of subbasin planning in the Columbia Basin is to respond to the Independent Scientific Group’s Return to the River report to the NPCC. Notable conclusions from that report were:

“We recommend incorporation of an integrated approach based on an overall, scientifically credible conceptual foundation…”

The NPCC responded to the ISG by creating the subbasin planning process, within the context of the 2000 Fish and Wildlife program. Subbasin plans provide the first basin-wide approach to developing locally informed fish and wildlife protection and restoration priorities.

Another important goal of subbasin planning process is to bring people together in a collaborative setting to improve communication, reduce conflicts, address problems and, whereever possible, reach consensus on biological objectives and strategies that will improve coordinated natural resource management on private and public lands.

The plan could potentially have a great effect on fish and wildlife resources in the subbasins, and could also have a significant economic impact on the communities within the subbasins. For these reasons, public involvement is considered a critical component in the development of the subbasin plans.

An important objective of this subbasin plan is to identify management actions that promote compliance of the federal Endangered Species and the Clean Water acts. None of the recommended management strategies are intended nor envisioned to compromise or violate any federal, state or local laws or regulations. The intent of these management strategies is to provide local solutions that will enhance the intent and benefit of these laws and regulations. The NPCC, BPA, NOAA Fisheries and the U.S. Fish and Wildlife Service (USFWS) intend to use adopted subbasin plans to help meet requirements of the 2000 Federal Columbia River Power System Biological Opinion. NOAA Fisheries and the USFWS have stated their intent to use subbasin plans as a foundation for recovery planning for threatened and endangered species.

From the Columbia River Basin Fish and Wildlife Program (NPPC 1994):

The development of the hydropower system in the Columbia River Basin has affected many species of wildlife as well as fish. Some floodplain and riparian habitats important to wildlife were inundated when reservoirs were filled. In some cases, fluctuating water levels caused by dam operations have created barren vegetation zones, which expose wildlife to increased predation. In addition to these reservoir-related effects, a number of other activities associated with hydroelectric development have altered land and stream areas in ways that affect wildlife. These activities include construction of roads and facilities, draining and filling of wetlands, stream channelization and shoreline riprapping (using large rocks or boulders to reduce erosion along streambanks). In some cases, the construction and maintenance of power transmission corridors altered vegetation, increased access to and harassment of wildlife, and increased erosion and sedimentation in the Columbia River and its tributaries.

The habitat that was lost because of the hydropower system was not just land, it was home to many different, interdependent species. In responding to the system’s impacts, we should respect the importance of natural ecosystems and species diversity.”

Some species, such as some waterfowl species, have seemed to benefit from reservoirs and other hydropower development effects, but for many species, these initial population increases have not been sustained.

The Klickitat plan could potentially have a great effect on fish and wildlife resources in the subbasin. It could have significant economic impacts on the communities within the subbasin as well. For these reasons, public involvement is considered a critical component in the development of the subbasin plans. Considerable time and effort was spent from the earliest meetings to craft a statement or “vision” of what the participants would like to see in their subbasin as the result of efforts to restore, protect and enhance fish and wildlife populations and their habitat.

Public involvement in the subbasin planning processes for the Klickitat, White Salmon and Lower Middle Mainstem Columbia River (including Rock Creek) included a public mailing, public meetings held at different locations and times throughout the subbasins, regular conference calls, use of a ftp site to store draft documents, posting draft subbasin plans on the NPCC website, and development and use of extensive e-mail lists that were intended to keep members of the public informed regarding the status of the subbasin planning process.

The subbasin planning team, as a part of its public outreach effort, developed a brochure for the public mailing. The brochure was sent as bulk mail and delivered to all postal customers residing in the three subbasins.

There were also a total of seven public meetings held as a part of the subbasin planning effort. These meetings were held on March 9 and May 6 in Goldendale, on March 11 and May 4 in White Salmon, on March 10 and May 5 in Bickleton, and on May 3 in Klickitat. Numerous technical and planning meetings, announced and open to the public, were held in many locations throughout the subbasins to facilitate collaboration, information flow and involvement by as diverse a group as possible. Throughout the subbasin planning process, participants worked on a vision statement that reflects their vision of the subbasin in 10 – 20 years. The vision statement for the Klickitat subbasin is as follows:

“We envision healthy self-sustaining populations of indigenous fish and wildlife that support harvest and other purposes. Decisions and recommendations will be made in a community based, open and cooperative process that respects different points of view, and will adhere to all rights and statutory responsibilities. These efforts will contribute to a robust and sustainable economy.”

Protect or enhance the structural attributes, ecological function, and resiliency of habitats needed to support healthy populations of fish and wildlife.

To restore and maintain sustainable, naturally producing populations of spring chinook, steelhead that support tribal and non-tribal harvest and cultural and economic practices while protecting the biological integrity and the genetic diversity of the subbasin.

There are several expressions of a change in ecosystem processes within the Klickitat Subbasin that have been identified as a part of the subbasin planning process. They will be the target of the plan’s strategies to improve conditions for fish and wildlife productivity.

Because of the large number of wildlife species and habitats present in the subbasin, biologists could not provide adequate descriptions and status reports for each. Instead, they chose to select focal habitats on which to focus assessment and management analysis. The focal habitats are montane coniferous wetlands, ponderosa pine/Oregon white oak forests and woodlands, interior grasslands, and interior riparian areas (see Table 5).

The focal fish species chosen are the steelhead/rainbow, spring chinook salmon and bull trout. Pacific lamprey was chosen as a species of interest.

A number of conditions are present in the subbasin that limit fish and wildlife populations. There has been an increase in fine sediment delivery into the Klickitat River system over historic conditions. There has also been a significant increase in hydroconfinement. Thirdly, large woody debris has decreased in streams, depriving fish of desired hiding and resting places. Riparian function has deteriorated over time. And salmon carcasses have significantly decreased in number due to diminishing run sizes, effectively limiting critical marine derived nutrients from streams and negatively affecting food availability.

Strategies and actions are identified within the management plan to address the change in ecosystem function as well as address limiting factors for production and abundance in the Klickitat subbasin. Where possible geographical priorities are identified within assessment units and ranked as either primary or secondary tier actions.

Positive change is under way. For example, the tunnels at Castile Falls on the Upper Klickitat have been modified to remedy passage impediments, easing access to at least 35 miles of habitat. However, operation and maintenance as well as maintenance and evaluation will be needed — this is a primary strategy outlined in the subbasin management plan.

Strategies and actions that may be implemented throughout the subbasin include the following: increase floodplain channel and roughness, reconnect side channels, improve floodplain connectivity, relocate floodplain infrastructure and roads, improve maintenance, rehabilitate and decommission roads as appropriate, re-establish and/or enhance native vegetation within floodplain, implement practices that leaves sources of large woody debris in-stream that occur naturally, and/or artificially introduce large woody debris. Building fish populations in the upper Klickitat assessment unit and elsewhere would help provide enough carcasses to restore that missing link in the food web. These strategies will improve the lot of both fish and wildlife.

Of the uncertainties within the subbasin, the following were identified as primary needs for study: the presence of pathogens in juvenile and adult fish, assessments of the relative contributions of various sources to increased fine sediment, the significance of native bird predation on fish populations, the frequency and difficulty of passage at Little Klickitat Falls, the effectiveness and utilization of the Castile Falls tunnels.

Other primary strategies involve evaluation of lamprey habitat needs and the implementation of restoration actions.

A general theme across the subbasin is a reduction in the quantity and quality of all types of wildlife habitat that the focal and other species need to flourish.

This plan’s objectives and strategies recommend efforts to restore riparian wetland habitat in order to bring benefit to both fish and wildlife. Those actions involve both restoring habitat by increasing native vegetation and creating adequate hydrological conditions to reconnect habitats in tributary and mainstem floodplain areas.

Primary strategies in both the fish and wildlife portions of this management plans are strategies to restore beaver habitat and, were possible, to prepare for reintroduction of a species whose numbers are greatly reduced from historic levels. The restored habitat would benefit beaver, whose activities would in turn benefit the salmon and steelhead that spend a portion of their life history in the watershed. Beaver dams result in the creation of off channel habitat and increased channel stability, both of which benefit focal fish species.

Among the causes of the diminution and fragmentation of shrub steppe habitat are agriculture and other human development, altered fire frequencies and invasive weed species. Habitat quality can be improved by supplementing the ability to control fires, restoring more natural fire cycles, encouraging appropriate grazing practices, prioritizing weed control areas, and implementing native plant restoration. Restoration and protection of habitats are key strategies.

Habitat quality and ecological function in Ponderosa pine / Oregon white oak habitat has been reduced because of altered forest species composition and age structure. Harvest practices have resulted in removal of late seral stands and large overstory trees across the landscape.

Monitoring and evaluation activities within the Klickitat subbasin have invaluably informed and improved habitat projects as well as supplementation efforts. Continued monitoring and evaluation (M & E), along with additional work in targeted areas, is critical to identify successful actions. There are several current actions being taken in the subbasin that have benefited from past M & E efforts. M & E will continue to play an integral role toward understanding what works for fish and wildlife in the subbasin and what does not work, which allows for adaptive management for fish and wildlife projects in the subbasin. 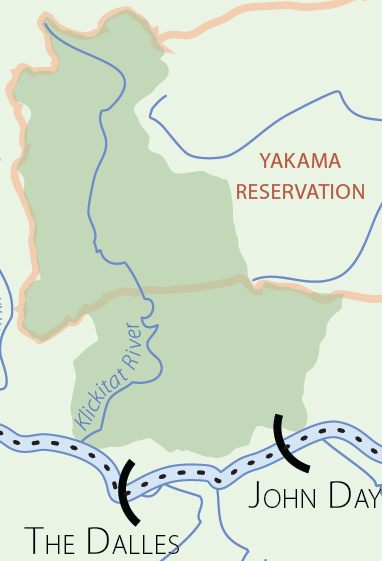