The Subbasin Plan defines fish and wildlife goals, objectives, and strategies for the Hood River Subbasin and the adjacent Lower Oregon Columbia Gorge Tributaries for the next 10 to 15 years. The plan will be submitted to the Northwest Power Planning Council for adoption under the Council’s Fish and Wildlife Program. Its purpose is to help direct Bonneville Power Administration funding to projects that address fish and wildlife populations adversely impacted by the Columbia River hydropower system. The Subbasin Plan components are a 1) Assessment, or evaluation of current and historic biological and physical conditions; 2) Inventory of existing fish and wildlife programs and measures; and 3) Management Plan outlining measurable biological objectives and prioritized strategies to meet those objectives. Given major differences in land use and ecosystem characteristics between the Hood River Subbasin and the Lower Oregon Columbia Gorge Tributaries planning units, a separate Assessment and Management Plan was prepared for each of these areas.

In the Hood River Subbasin, chronic human-caused habitat disturbances are believed to intensify and prolong the effects of frequent large scale natural disturbances leading to population declines in the focal species bull trout, spring chinook, fall chinook, and summer and winter steelhead. Key limiting factors for chinook and steelhead included flow, channel stability, habitat diversity, key habitat quantity, and sediment load. The scheduled removal of the Powerdale Hydroelectric Project and dam in 2010, and restoration of physical habitat connectivity for adult and juvenile life stages at other dams and diversions have the potential to substantially increase the survival of focal species in the Hood River. Six habitat restoration scenarios were run for salmon and steelhead using the Ecosystems Diagnosis and Treatment model developed by Mobrand Biometrics, Inc. The largest predicted increase in spawner and juvenile outmigrant production for all species from a single restoration action was the Large Woody Debris restoration scenario. This scenario resulted in a 39% increase in summer steelhead smolts ranging up to a 365% increase for spring chinook. However, other assessment information indicates that flow restoration and fish passage will have significant positive effects on population abundance.

Preventing further losses of big game winter range, including oak, pine and grassland habitats for focal species lark sparrow and gray squirrel, was found to be important to the populations and persistence of many focal species. Wildlife corridors and habitat connectivity need to be maintained and actions taken to insure that movements and dispersal of wildlife can occur in the future. The spatial and temporal needs of wildlife need to be defined and considered to insure that increasing backcountry recreation and land development does not degrade available forest habitats and adversely affect populations, and biodiversity can be maintained.

For the Gorge Tributaries Planning area, retention and enhancement of bottomland hardwood stands, nest cavity development for purple martin, protection of large conifer and cottonwood perch and nest trees, and increasing aquatic and wildlife connectivity across the Interstate 84/Union Pacific Railroad corridor were the priorities. Managing or preventing recreational disturbance near bald eagle nest trees and forage areas on sandbars was also identified as a need if bald eagle presence in the Gorge is to be maintained and enhanced. Fire fuels reduction plans in the urban-interface areas may better integrate wildlife habitat diversity needs, and mimic some of the results of natural fire processes. 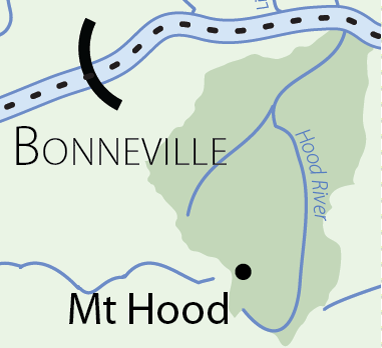 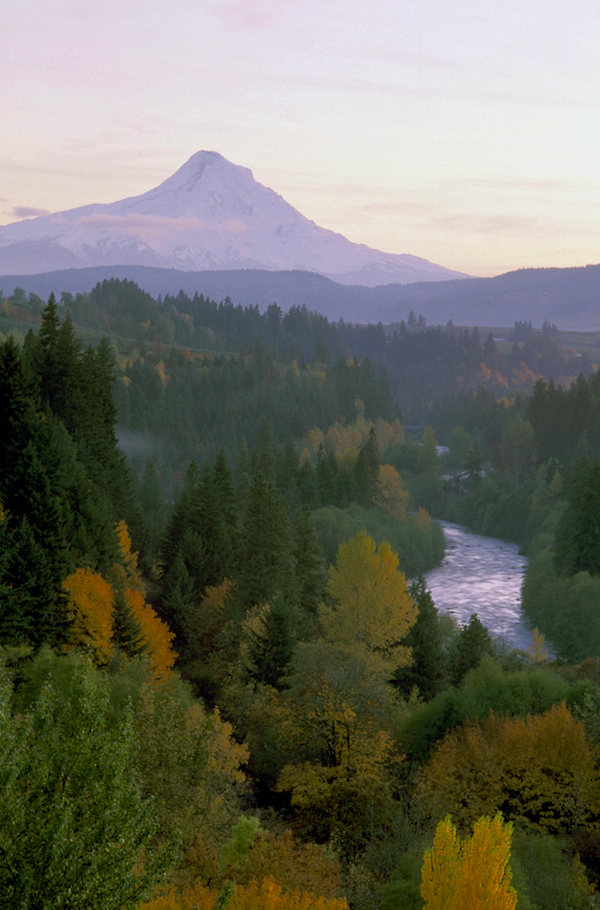 The Hood River with Mt. Hood in the background. ODOT.

The Hood River with Mt. Hood in the background. ODOT.