The Imnaha subbasin is located in the farthest northeastern corner of Oregon (45 ̊ Latitude, 117 ̊ Longitude) near the center of the Columbia Basin. The Columbia Basin has been divided into 11 provinces by the Northwest Power and Conservation Council (NPCC, formerly the Northwest Power Planning Council or NPPC) to aid in the subbasin planning process. The grouping of subbasins into provinces was based on physical similarities among subbasins. The Imnaha subbasin is one of four subbasins in the Blue Mountain Province; it is bordered to the west by the Grande Ronde subbasin, to the east by the Snake Hells Canyon subbasin, and to the north by the Asotin subbasin.

Like the Grande Ronde, the Imnaha River flows in a northerly direction and is a direct tributary to the Snake River. The entire drainage is contained in U.S. Geological Survey (USGS) 4th field hydrologic unit code (HUC) 17060102 and joins the Snake River at river mile (RM) 191.7, approximately 48 river miles upstream of Lewiston, Idaho, and 3.4 miles upstream of the Salmon River confluence. The headwaters of the Imnaha River drain the eastern escarpment of the Wallowa Mountains and originate within the Eagle Cap Wilderness. At lower elevations, the Imnaha obtains flow from streams draining an adjacent plateau, which is located between the Wallowa River drainage to the west and Hells Canyon of the Snake River to the east (Kucera 1989). Ninety-eight percent of the subbasin lies within Wallowa County, with the remaining 2% split between Baker and Union counties. The subbasin is sparsely populated and contains only the small town of Imnaha (population 25) within its boundaries.

The Imnaha subbasin drains an area of 850 square miles (2,202 square kilometers or 549,600 acres). It is one of the smallest subbasins; of the 62 subbasins delineated by the NPCC for use in subbasin planning, 16 are smaller and 45 are larger. When compared with the other three subbasins within the Blue Mountain Province, the Imnaha subbasin ranks third in size since it is significantly smaller than the Grande Ronde subbasin (roughly 4,000 square miles), slightly smaller than the Snake Hells Canyon subbasin (924 square miles) and more than twice the size of the Asotin subbasin (325 square miles). The subbasin is commonly divided in half at the town of Imnaha, which marks the confluence of the mainstem Imnaha and its largest tributary, Big Sheep Creek. The total area of the mainstem Imnaha, including all tributaries but Big Sheep Creek, is 508 square miles, while the total area of the Big Sheep Creek watershed is approximately 350 square miles.

Considering their federal status listing, the Imnaha Aquatics Technical Team (IATT) agreed that the selection of the four threatened salmonids and Pacific lamprey was appropriate. Ecological considerations in the selection of the focal species were based on the unique genetic characteristics, roles and habitat types occupied by the respective fishes. The various focal species selected by the IATT were considered to be locally important to the Imnaha subbasin based on their economic value (e.g., spring/summer chinook and steelhead fisheries), ecologic value (e.g., genetic uniqueness, contribution to respective Environmentally Significant Units/Recovery Units), and cultural significance.

Distribution is unique for the various aquatic focal species, which supported the IATTs selection. Fall chinook and lamprey represent a mainstem-oriented species occupying low gradient stream reaches. Key spring/summer chinook spawning and rearing areas are also on mainstem reaches, yet occur farther upstream in the subbasin. Summer steelhead represent the most widely distributed salmonid, and spawn and rear throughout most accessible reaches in the subbasin. Bull trout represent a headwater-oriented species, with a fluvial component that occupies various distinct habitat types throughout the year.

All focal species selected have important cultural significance to the Nez Perce Tribe. As a fishing-oriented tribe, the Nez Perce have relied upon the Imnaha subbasin to harvest salmon and steelhead for consumptive and religious purposes. Although currently depressed, Pacific lamprey were also sought after by the Nez Perce. Bull trout, although currently not harvested, also represent a species historically harvested by Nez Perce peoples. 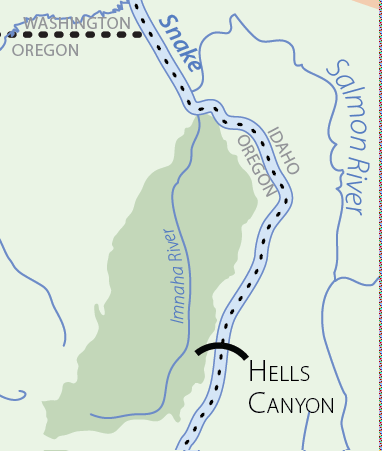 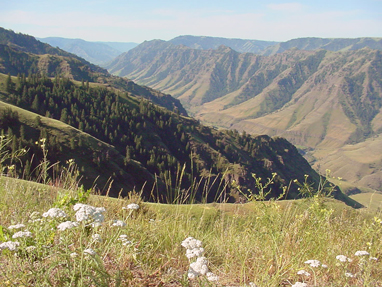