The dams on the Columbia and Snake rivers continue to adversely impact juvenile anadromous salmonids and lamprey during their migration to the ocean. In fact, downstream juvenile migration is the life history stage where most of the human-caused salmonid mortality occurs. In 2013, for example, chinook and steelhead passing passed through the eight-dam mainstem system, mortality was 47.7% and 56.4% respectively (NMFS 2013).

Construction of the dams created a series of reservoirs, destroying mainstem habitat, increasing juvenile travel time, and facilitating predation by making invasive and natural predators more effective. Operation of the hydrosystem alters the natural hydrograph of the river system, reducing flow in the spring migration season and adding again to juvenile migration times. The dams themselves impair passage and pose one of the largest single sources of mortality for juvenile salmon migrants. Transportation of fish around dams by tanker trucks and barges is ongoing: juvenile fish continue to suffer from both direct and delayed mortality effects.

The 1995 Spirit of the Salmon Plan called for the implementation of a program of short-term and long-term juvenile passage and mainstem habitat restoration measures at both the federal and non-federal Columbia and Snake River dams. These measures addressed flow, spill, transportation, turbine efficiency and structural changes. While numerous improvements have been made to the Federal Columbia River Power System (FCRPS) over the last 15 years, significant mortality still occurs. The juvenile dam survival standards in the 2008 Biological Opinion (BiOp) (96%/93% at each dam), still allow for up to 28% mortality at the dams (the concrete) for spring migrants and 44% mortality for summer migrants (for those fish passing eight federal dams). This does not include any mortality that may occur in the reservoirs, which vary widely based on yearly water conditions. The National Marine Fisheries Service (NMFS) has not determined what standards will be included in the 2018 BiOp.

The mid-Columbia Public Utility District (PUD) dams that impact upper Columbia stocks are to meet a dam passage survival standard of 93% for juveniles that pass the projects. Similar to the FCRPS, this standard does not take into account any mortality that may occur in the reservoirs. The Federal Energy Regulatory (FERC) licenses govern the PUD dams. Habitat Conservation Plans (required under Endangered Species Act implementation) and Memoranda of Agreement. The NMFS biological opinions associated with these FERC licenses do not require measurement to see if the survival standard is being met.

The environment encountered by juvenile salmon during their migration through the mainstem Columbia and Snake rivers has changed significantly over the last 15 years. These changes include both structural improvements and operational changes, in the case of FCRPS projects, and stem primarily from revised Biological Opinions for the FCRPS (2004 and 2008) and court-ordered spill operations resulting from litigation over those BiOps. In the litigation, the tribes were critical to winning concessions that improved conditions for fish migration. The subsequent agreements under the Columbia Basin Fish Accords cemented these benefits.

While structural changes have been made at mid-Columbia PUD projects, their benefits have been used to reduce spill operations, leaving no net benefit (and potentially a negative) for juvenile migrating fish.

Operations: Significantly, a 2005 federal court order called for operations to move to 24-hour spill at all FCRPS projects in both the spring and summer. Prior to 2005, John Day, McNary, Little Goose, Lower Monumental and Lower Granite dams had no daytime spill during the spring season and in the Snake River no spill during the summer. (Instead juvenile summer migrants from the Snake River were transported below the dams.) The order also allowed for earlier spring spill and increased spill volumes at many projects, most notably at Bonneville and Lower Monumental dams. See adjacent tables, FCRPS Spring Spill and FCRPS Summer Spill. Note before the court-ordered spill program is in red, while the after court-ordered spill program is in green.

The court order did not address mid-Columbia PUD dams. These dams have actually reduced spill over the years as structural changes have been implemented, as shown in the table, Mid-Columbia Spill Comparison 2000 and 2011.

Total Dissolved Gas: The 1995 FCRPS BiOp endorsed a Total Dissolved Gas (TDG) standard of 115% as measured by forebay monitors and 120% as measured by tailrace monitors instead of the 125% TDG level that was identified in the 1995 risk assessment as supported by the tribes in the Spirit of the Salmon Plan. This more conservative level was chosen since no voluntary spill program existed before this time and its effects were uncertain. Oregon and Washington both adopted the 115%/120% standards; however, Oregon has since dropped the forebay requirement. Data collected from 1995 to the present still supports the original 1995 risk assessment that levels of TDG up to 125% pose little risk to aquatic species. The higher standard allows for more spill and associated passage survival benefits; the tribes continue to advocate for the higher levels of TDG up to 125% in the tailrace.

Structurally, the hydroelectric dams have gone through extensive retrofits on the spillways and tailraces to greatly reduce the production of TDG and still provide adequate spill for safe fish passage.

Turbine Efficiency: The 2008/2010 FCRPS BiOp calls for turbine operations to be in the 1% operating band through the entire fish passage season. A 1% operating band provides the best turbine passage conditions for fish that use that route.

Spill Passage Efficiency: The 2008 Accords identified minimum for spill passage efficiency (passage efficiency through spillways) per project, which the U.S. Army Corps of Engineers has committed to maintain. (See Accords Attachment A, Table 1.) These range from 36% to over 90%.

Reach Survival: No specific reach survival metrics were included in the 2008/2010 FCRPS BiOp. However, operational and structural changes that have aided survival through the hydrosystem have also improved reach survival for in-river migrants. Smolt-to-adult return rates (SARs) for in-river migrants are now similar to SARs for transported migrants. As a result, transportation benefits have diminished for all salmonid species; and, depending on migration time and species, transportation may add no benefit at all.

Despite the improvement at the federal dams, SARs are still short of what is needed for recovery (ISAB 2012). In addition, recent comparative survival study results indicate a difference in the SARs between Snake River migrants and upper Columbia stocks outmigrating in the same year (Comparative Survival Study Oversight Committee and Fish Passage Center 2012). The study shows that since 2004 the smolt-to-adult survival ratio is smaller for upper Columbia River stocks.

A likely, though not a conclusive, explanation is that over the past decade spill volumes at mid-Columbia projects have decreased while spill in the Snake River has increased (Comparative Survival Study Oversight Committee and Fish Passage Center 2012). The data show poorer reach survival between Rock Island to McNary (for upper Columbia River stocks) than between Lower Granite to McNary (for Snake River stocks).

Structural Improvements: Starting in 2001, new surface passage structures (removable, top, adjustable spillway weirs, and the Bonneville corner collector) have been added to the FCRPS dams. Surface passage structures allow downstream migrating fish to pass the dam at the surface. This reduces juvenile fish passage delay, improves water quality, makes more efficient use of spill, improves juvenile fish survival, and helps direct more fish over the spillway instead of through the bypass. When downstream migrating fish pass dams at the surface, the result is fewer fish transported downstream by barges and trucks. All FCRPS dams on the Snake and Columbia rivers now have at least one surface passage structure. See adjacent table, Major Dam Structural and Operational Changes Since 2000. In the mid-Columbia, Rocky Reach and Wanapum dams have surface pass structures. Additional structural changes have also been made to improve juvenile fish passage, such as installation of spill deflectors, restructuring of spill walls, relocation of juvenile outfalls to improve tailrace egress, and improved avian wire systems to lower predation in the tailrace (also shown in the adjacent table).

Through implementation of increased spill levels and structural changes, the FCRPS is aiming to reach an average, per dam, passage survival standard of 96% for spring migrants and 93% for summer migrants. These standards are currently being tested. System survival appears to have increased under these operations. With spill and surface spill structures, chinook survival from the Snake River Trap at the Lewiston Bridge to McNary Dam was 75.3% and 74.3% in 2009 and 2010, respectively, in contrast to 53.1% in 2001 when no spill was provided. This compares to an average survival from the Salmon River to Ice Harbor Dam of just 33% following the completion of Lower Monumental and Little Goose dams in 1970, but an 89% survival in the same reach prior to the construction of those dams (1966-68).

Flow: Flow targets called for in the 1995 Spirit of the Salmon Plan have not been achieved. The 2008 BiOp includes flow objectives that are not mandatory.

Drawdown: Drawdown of the reservoirs called for in the 1995 Plan have not been achieved. Litigation on the FCRPS BiOp led to the development of a Plan of Study for John Day Reservoir drawdown, which serves to accelerate drawdown of that reservoir should certain biological decline triggers be met. The study is available here»

If the FCRPS or mid-Columbia PUD projects do not meet performance measures (96% and 93% for FCRPS and 95% for mid-Columbia) and/or SARs decline precipitously, this could force the region to look at additional or alternate solutions. This could include actions to: 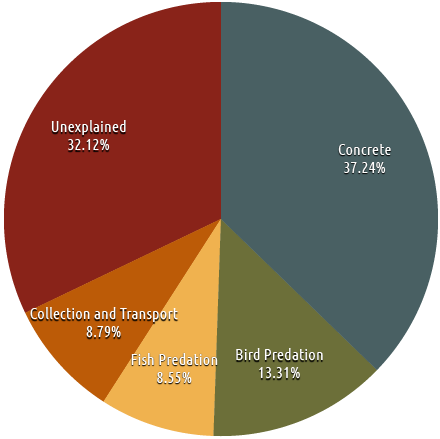 Dams or “concrete” are the single largest source of human-caused mortality for Snake River hatchery spring chinook and other salmonids.

Dams or “concrete” are the single largest source of human-caused mortality for Snake River hatchery spring chinook and other salmonids.

« Previous:Reintroduction
Next: Estuary Protection and Restoration »
Back to Top