Along with competition, migration and immigration, predation is a keystone agent that controls fish population dynamics. Although predation is a naturally occurring population control agent, management becomes necessary in a highly modified environment such as the Columbia River Basin. Since the publication of the Spirit of the Salmon Plan in 1995, an alarming increase in predation of salmon, lamprey and juvenile sturgeon by birds, marine mammals and other fish has occurred (Rieman et al. 1991; Collis et al. 2002; Evans et al. 2012; Stansell et al. 2010). In the basin, newly created habitat from dredge spoils increased predacious bird populations; a lack of historical primary food sources brought more hungry sea lions upriver; and changes in the flow regime and the introduction of exotic species gradually expanded predacious fish populations. These negative changes in avian, mammalian and fish species population dynamics have tipped the predator/prey balance to the point that active management is required to rebalance predator populations and reduce salmon, lamprey and sturgeon losses.

Avian predation refers to predation by piscivorous (i.e., fish eating) birds on salmonids. Key avian predator species in the Columbia Basin include double-crested cormorants (Phalacrocorax auritus), Caspian terns (Hydroprogne caspia), California gulls (Larus californicus) and ring-billed gulls (Larus delawarensis). The abundance and distribution of double-crested cormorants and Caspian terns has increased dramatically in recent years, from a few hundred to tens of thousands in a less than 20 years (Roby et al. 2012). In 2011 the combined loss was approximately 23 million smolts (BRNW 2012). Smolts may also be subject to predation by marine seabirds off the Pacific coast. Estimates of these oceanic predators are upwards of a hundred thousand birds or more (Fredricks personal communication 2013).

Fish predation (i.e., fish on fish predation) is well studied or barely studied, depending on the species of predator. Baseline research efforts in the John Day reservoir on the Columbia River in the 1980s identified the northern pikeminnow (Ptychocheilus oregonensis), a native fish,as a significant predator of salmonid smolts, along with non-native walleye, smallmouth bass and channel catfish (Vigg et al. 1991). Estimates of smolt predation were in the millions, with most eaten by northern pikeminnows, which are not protected as a game fish by the states of Oregon and Washington. An intensive government-sponsored public control program on northern pikeminnows was initiated in 1990 and continues in 2013. The program has removed nearly 4 million pikeminnow from the Columbia and Snake rivers. Management action to remove non-native piscivorous fishes has not been taken, although sufficient information confirms their direct and indirect impacts on salmon (ISAB 2008). In 2013 Washington State, however, removed the catch size and daily limits on catfish, walleye and smallmouth bass on selected areas of the Columbia and Snake rivers and their tributaries upstream of McNary Dam.

Active management will keep predators at a level that is more in balance with the environment and reduce losses of Columbia River salmon and other native fish populations. To achieve this, the following actions must be taken.

Fewer Columbia River salmon, lamprey and sturgeon will be lost to predators. 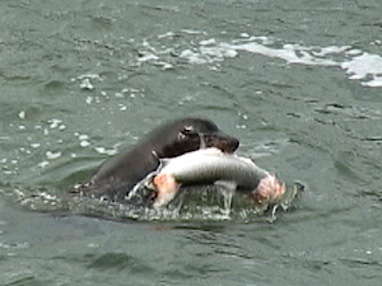 « Previous:Sturgeon
Next: Mark Selective Fisheries »
Back to Top