Located in the southwest portion of the Blue Mountains Ecological province, the Grande Ronde subbasin is characterized by rugged mountains and two major river valleys. It is defined by the Blue Mountains to the west and northwest, and the Wallowa Mountains to the southeast. It is in these mountain ranges, with peaks as high as 7,700 feet in the Blues and nearly 10,000 feet in the Wallowas, where the headwater streams of the Grande Ronde begin. Subbasin corners are approximated by the following Townships and Ranges; NW corner (T7N/R39E), NE corner (T7N/R46E), SW corner (T4S/R42E), SE corner (T6S/R35E).

The Grande Ronde River flows generally northeast 212 miles from its origin to join the Snake River at river mile (RM) 169, about 20 miles upstream of Asotin, Washington and 493 miles from the mouth of the Columbia River. The Grande Ronde River begins in the Blue Mountains near the Anthony Lakes recreation area, flows north, then northeast and through the cities of La Grande and Island City (RM 157). Here, in the valley, the river slows and meanders the valley floor before continuing north-northeast through the towns of Imbler, Elgin and Troy, Oregon (RM 46), then it crosses into Washington at RM 38.7 before joining the Snake River. There are 8 dams on the Columbia and Snake rivers between the Grande Ronde River and the Pacific Ocean.

The Grande Ronde subbasin encompasses an area of about 4,000 mi2 in northeastern Oregon and southeastern Washington. The Grande Ronde subbasin drains much of the extreme northeast corner of Oregon as well as 341 mi2 of southeast Washington. The subbasin includes large portions of Union and Wallowa Counties and a small portion of Umatilla County in Oregon as well as about a third of Asotin County and small portions of Columbia, and Garfield counties in Washington.

The Grande Ronde River subbasin once supported fisheries that were an important part of tribal cultures and economies (James 1984, Wallowa County and Nez Perce Tribe 1999, Ashe et al. 2000). These fisheries included both anadromous and resident populations and a variety of species. As European settlement came to the area, the fisheries were woven into the culture of these new inhabitants, as well. During the intervening years, some species have been lost from the subbasin and other, non-native species have been introduced.

An estimated 38 species of fish, including 15 introduced species and 6 species federally listed as Threatened or Species of Concern, are found in the Grande Ronde River subbasin.

Once abundant (Thompson and Haas 1960), coho salmon (Oncorhynchus kisutch) were extirpated from the subbasin in the 1980’s. Historic abundance of sockeye salmon (O. nerka) in the Wallowa River system is unknown, but it is assumed to have been high given the presence of sockeye canneries at Wallowa Lake in the 1890’s (ODFW et al. 1990). Although anadromous sockeye salmon were extirpated from the area by 1905, their genetic component may still be present in wild kokanee in Wallowa Lake. Golden trout (O. aguabonita) are suspected to persist in a few high mountain lakes from introductions prior to 1958 but their present abundance and distribution are unknown.
  
Focal Species Selection
Focal species are a limited set of aquatic species for which management objectives are established that describe a future desired condition for the species. These species were selected to be representative of basin communities and indicators of habitat conditions. Thus emphasis for selection was on species that spend the majority or critical stages of their lifecycles within the subbasin.

Sockeye and coho were eliminated as focal species because they are extinct in the Subbasin. The anadromous form of sockeye has been extinct since 1920 and only kokanee persist in Wallowa Lake. Coho salmon were extirpated from the subbasin in the 1980’s.

Pacific lamprey occurred historically in the Grande Ronde River subbasin. Remnant populations may persist in the subbasin but their distribution and abundance are unknown making assessment of this species distribution and habitat conditions difficult.

The final focal species selected for consideration in this analysis are spring Chinook, summer steelhead and bull trout. This was based on their current presence and broad distribution in the basin, as well as, their biological, economic and cultural significance. 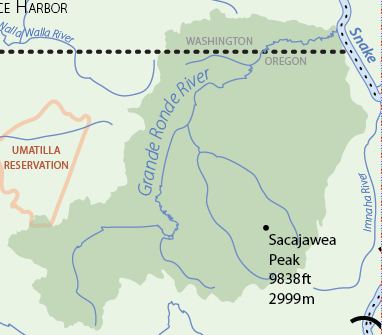 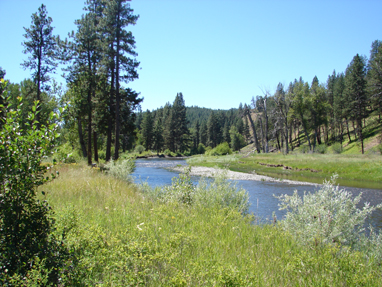