The Mid-Columbia River Mainstem was named the Columbia Cascade Province (CCP) in the 2004 NPCC subbasin planning process. The CCP is the fourth smallest of the ecological Provinces and covers an area of approximately 9,407 sq. mi. It is defined as the Columbia River and all tributaries from Chief Joseph Dam to Wanapum Dam. This area includes much of north-central Washington. The CCP is divided into six subbasins: Lake Chelan, Okanogan, Methow, Entiat, Wenatchee, and Upper Middle Mainstem (CBFWA 2003).

The Cascade Mountains form the western border of the CCP, and the U.S. / Canada border forms the northern edge. The northeastern corner of the CCP passes through the Okanogan National Forest and the Colville Indian Reservation, while the southeastern boundary is bordered by Banks Lake, Lake Lenore State Wildlife Area, and the towns of Ephrata and Quincy. Wanapum Dam lies at the southern tip of the CCP.

The CCP overlies two significantly different physiographic regions and topography varies widely (10,000 ft. at Glacier Peak to 600 ft. at the Columbia River). The Cascade Mountains, to the north and west, consists primarily of metamorphosed sedimentary, volcanic and granitic rock, while the Columbia Plateau, to the east and south, features vast thick layers of basaltic bedrock. The hydrology of the CCP is complex; surface water includes numerous small tributaries draining to the Columbia River, while underlying the region is the Columbia Plateau Regional Aquifer System.

The Vision Statement for the Upper Middle Mainstem Subbasin is largely based on the Douglas County Watershed Planning Association Goal Statements for water resources. They are based on a sustainable future for the landscape, the economy, and the people within the Subbasin.

Our vision for the landscape is to balance habitat conservation with human uses to ensure the long-term health of plant, fish, wildlife and human communities.

Our vision for the economy is based on efficient management and use of natural resources including reliable water supplies, fish and wildlife populations, and aquatic and terrestrial habitats.

Our vision for the people is to manage natural resources to promote social and economic well- being and to improve or maintain our quality of life. We will work together to foster increased understanding of the importance of natural resource conservation.

The analysis and synthesis of information in this subbasin plan is summarized as follows:

• Columbia River water is managed at a much larger scale than the subbasin or province, and within the subbasin and province most of the fisheries management is guided through existing legal agreements (HCP, FERC, ESA etc.).
• Small tributaries in the UMM Subbasin are generally thought to be in better shape than initially thought, although certain areas need significant improvements to be functional or accessible to anadromous and resident fish. In addition, data is severely lacking in many of the tributaries and is needed to develop better strategies for fish or wildlife in those areas.
• Shrubsteppe and herbaceous wetlands are the two dominant habitat types within the UMM and this subbasin contains some of the most important shrubsteppe habitat in the state for several species. WDFW, BLM, and The Nature Conservancy are the largest landowners that specifically manage for natural resources in the subbasin. Also, there are substantial conservation programs (e.g. CRP etc.) designed to assist private landowners in managing their lands to conserve natural resources. 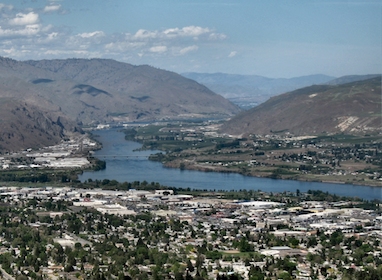 The Columbia River flowing through the city of Wenatchee. Photo: USDOT

The Columbia River flowing through the city of Wenatchee. Photo: USDOT