The Wenatchee subbasin drains a portion of the east Cascade Mountains in north central Washington within Chelan County. The Wenatchee River enters the Columbia River at river mile (RM) 470. The subbasin covers 849,777 acres, with 231 miles of major streams. Wenatchee River has about163 lineal miles of stream accessible to anadromous salmonids. The watershed originates in the Cascade Mountains, including the Alpine Lakes and Glacier Peak wilderness areas.

Construction of Grand Coulee Dam in 1934 blocked over 1,000 miles of habitat in upstream of the Columbia Cascade Province in the upper Columbia River basin. Another 52 miles of habitat was blocked in 1961 by the completion of the Chief Joseph Dam. In addition, there are 6 hydroelectric projects downstream of this ecological province: Wanapum Dam and Priest Rapids Dam, and four federally owned projects, McNary Dam, John Day Dam, The Dalles Dam and Bonneville Dam.

To offset the loss of anadromous salmonid production by the federally built projects, the federal government built and continues to operate the Leavenworth National Fish Hatchery (NFH) in the Wenatchee subbasin, and later, the Entiat and Winthrop NFHs in the Entiat and Methow subbasins, respectively. No federal mitigation facility was constructed in the Okanogan subbasin.

With the construction of each of the privately owned mid Columbia hydroelectric projects, additional production/hatchery facilities were developed in the Columbia Cascade Province. The recent Habitat Conservation Plan (HCP), initiated by Chelan and Douglas Public Utility Districts (PUDs) for ESA Section 10 consultation, identified the mitigation obligation of the PUDs. The HCP also provides the groundwork for future changes in facility production goals and operations. Details of these changes in hatchery production will be resolved over the next several years.

In spite of past mitigation efforts, declining salmonid populations in the Columbia Cascade Province have resulted in ESA listings of spring chinook (endangered March 1999) and summer steelhead (endangered August 1997). Upper Columbia late-run chinook and Lake Wenatchee sockeye were also petitioned (March 1998) but were determined not warranted for listing. Recent years have shown improved salmonid runs to the province, consistent with findings throughout the Columbia basin.

The Wenatchee River is unique among subbasins in the upper Columbia region in that it supports the greatest diversity of populations and overall abundance of salmonids. There are core populations of sockeye salmon, steelhead, bull trout and both spring and later-run chinook salmon in the upper Wenatchee subbasin that are relatively strong, when compared to other populations in the Columbia basin.

The Washington state Salmon and Steelhead Stock Inventory (SASSI) has identified four spring chinook stocks in the Wenatchee subbasin; the Chiwawa River, Nason Creek, Little Wenatchee River, and White River stocks. A fifth stock, the Leavenworth NFH stock is unlisted and supports the only spring chinook fishery in the mid and upper Columbia basin. Spring chinook and steelhead trout are listed as endangered under the ESA. SASSI has also identified the Wenatchee River late-run chinook stock. It is likely that a fall run chinook salmon once used the lower Wenatchee River to varying extent, although very little information is available to substantiate this. For the purposes of this subbasin plan, fall and summer chinook life history types will be consolidated as late-run chinook. One stock of sockeye has been identified for this subbasin as well as one summer steelhead stock, the Wenatchee summer steelhead (WDF/WDW 1993).

Indigenous coho salmon no longer occur in the upper Columbia River region. By the early 1900s coho salmon populations were already decimated by lower Columbia River harvest rates, impassable dams, unscreened irrigation diversions, logging, mining, grazing, and water use practices in the tributaries. Through current and substantial efforts by the Yakama Nation, naturally reproducing coho salmon have been reintroduced into the Columbia Cascade Province. The restoration program is generally in its infancy but the YN and other resource managers intend to continue and expand the re-introduction effort in the Province.

Pacific lamprey is known to exist in the Wenatchee subbasin but at this time there is no empirical information to suggest population abundance or distribution.

A number of resident fish are present in the assessment units comprising the Wenatchee subbasin. The Wenatchee subbasin supports adfluvial, fluvial and resident forms of bull trout. The upper Columbia distinct population segment (DPS) of bull trout is listed as threatened (June 1998) under the federal ESA. Westslope cutthroat trout are fairly widespread within the subbasin, found mostly in the head water and higher elevation streams. Two species, the mountain sucker and Umatilla dace are Washington state priority habitat species and have state candidate listings. 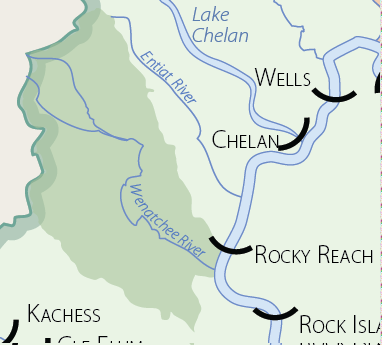 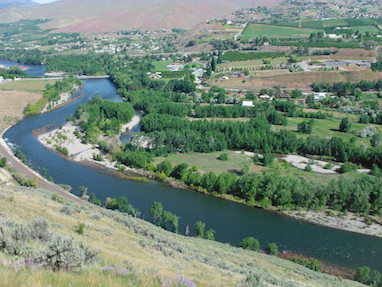 The Lower Wenatchee River near its confluence with the Columbia River in Wenatchee, Washington.

The Lower Wenatchee River near its confluence with the Columbia River in Wenatchee, Washington.