The Walla Walla Subbasin encompasses 1,758 square miles located in Walla Walla and Columbia Counties in southeast Washington State and Umatilla County in northeast Oregon State. Primary waterbodies include the Walla Walla River and Touchet River, both of which originate in the Blue Mountains. The Touchet River is a tributary to the Walla Walla, which is a direct tributary to the Columbia River. Melting snow from the Blue Mountains provides much of the annual runoff to the streams and rivers in the subbasin; the water level in many streams diminishes greatly during the summer months. Vegetation in the subbasin is characterized by grassland, shrubsteppe, and agricultural lands at lower elevations and evergreen forests at higher elevations.

With dryland agriculture throughout the subbasin and intensive irrigated cropland in the Walla Walla River valley, the Walla Walla Subbasin is one of the most productive agricultural regions in the world. Timber harvest and urban land uses are also influential. Approximately 90 percent of the subbasin is privately owned, with 9 percent managed by federal/state agencies. The Confederated Tribes of the Umatilla Indian Reservation also owns approximately 8,700 acres within the subbasin.

The vision for the Walla Walla Subbasin is a healthy ecosystem with abundant, productive, and diverse populations of aquatic and terrestrial species that supports the social, cultural and economic well-being of the communities within the Subbasin and the Pacific Northwest.

To guide the assessment and management plan, focal species were selected for aquatic and terrestrial habitats within the Walla Walla Subbasin. Aquatic focal species are steelhead, spring Chinook salmon, and bull trout. These species were chosen based on the following considerations: 1) Selection of species with life histories representative of the Walla Walla Subbasin; 2) Endangered Species Act status; 3) Cultural importance of the species; 4) Level of information available about species’ life histories allowing an effective assessment.

In addition, Pacific lamprey, mountain whitefish, and freshwater mussels were designated as aquatic “species of interest” for this planning effort. These species are of cultural and ecological significance to stakeholders, but not enough information was available to warrant their selection as focal species.

Assessment of aquatic habitats for steelhead and salmon within the Walla Walla subbasin was accomplished with the Ecosystem Diagnostic and Treatment (EDT) model. Bull trout were not assessed using EDT as its methodology does not yet include information pertinent to that species. EDT is a system for analyzing aquatic habitat quality, quantity, and diversity relative to the needs of a focal species. The purpose of the analysis is to identify stream reaches that can provide the greatest biological benefit based upon potential improvement in habitat conditions. This is accomplished by comparing historic aquatic habitat conditions in the watershed to those currently existing relative to life history needs of the focal species. The result of the analysis is identification of stream reaches that have high potential restoration and protection values. These values allow prioritization of corrective actions to gain the greatest benefit with the lowest risk for the focal species.

For Walla Walla River summer steelhead and spring Chinook salmon, the EDT analysis identified areas that currently have high production and should be protected (High Protection Value) and areas with the greatest potential for restoring life stages critical to increasing production (High Restoration Value). These initial EDT results were then reviewed in light of the following four considerations: 1) results of related assessment and planning documents (Limiting Factors Analysis, Walla Walla Subbasin Summary, Walla Walla Basin Watershed Council documents, etc.); 2) the necessary trade-offs between the biological benefits provided by enhancement potential of one geographic area versus another to achieve geographic prioritization; 3) balancing the needs of all aquatic focal species; and 4) physical and socioeconomic limitations. This type of review was necessary given the data gaps currently present in the EDT model and the fact that EDT is an ecologically-based model that does not incorporate factors such as limited access to wilderness areas. Through this review, the initial EDT results were modified in a limited number of instances to develop a group of priority restoration geographic areas and a group of priority protection geographic areas. These geographic areas include the stream reaches themselves and the upland areas that drain to these reaches.

Priority restoration areas identified in the Walla Walla Subbasin are shown in the table below. Within these priority restoration areas, the most negatively impacted life stages were identified for steelhead and spring Chinook. In each of these areas, the key environmental factors that contribute to losses in focal species performance, i.e. limiting factors, were also identified. Key limiting factors for steelhead and spring Chinook included the following: sediment, large woody debris, key habitat (pools), riparian function, stream confinement, summer water temperature, bedscour and flow. Decreasing the effect of these limiting factors through habitat enhancement is expected to benefit all aquatic focal species, including bull trout. 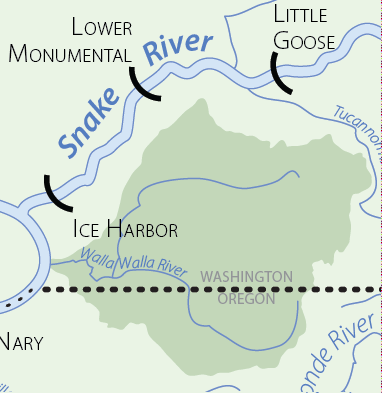 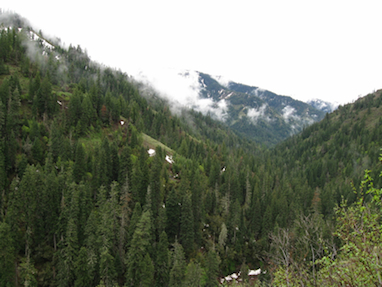