Sovereignty and consultation are among the basic principles that guide this Plan. They are also foundational to the relationship between federally recognized Indian nations and the United States. They define certain aspects of the legal relationship between tribes and states and tribal people and non-Indian people.

While these principles are not new, the federal government’s understanding of and prescriptions for sovereignty and consultation have changed since the Spirit of the Salmon Plan was published. These developments and some of the legal and historical background are presented in this section.

Tribal people lived on this land, with these waters, long before there was a United States of America. The tribes’ independent governments were and are self-governing and autonomous. In signing treaties with the federal government, the tribes and bands that now compose the Confederated Tribes of the Umatilla Indian Reservation, the Confederated Tribes of the Warm Springs Reservation of Oregon, the Yakama Indian Nation and the Nez Perce Tribe retained their inherent authority to govern themselves.

Treaties did not, as is frequently assumed, grant rights to Indians from the United States; rather, the tribes ceded certain rights to the United States government and reserved the rights they never gave away. Tribal governments use these treaties today to affirm and retain rights such as the sovereign right of self-government, fishing and hunting rights and jurisdictional rights over their lands.

The trust responsibility is a legal doctrine that has grown out of treaties, statutes, court decisions, and other dealings between the United States and Indian tribes. The United States is obligated to represent the best interest of the tribes, protect the safety and wellbeing of tribal members and fulfill treaty obligations. This is why the federal government and its implementing agencies owe a duty to recognize the impacts of their activities on the tribes, as well as a duty to safeguard natural resources, which are fundamental to tribal self-government and prosperity.

Government-to-government consultation is a key means to preserve sovereignty, Indian self-determination, self-governance and treaty rights. “Consultation” means the meaningful and timely process of seeking, discussing and carefully considering the views of another sovereign in a manner that is cognizant of all parties’ cultural values and, when feasible, seeking agreement. It means that there is direct dialogue between tribes and the U.S. government on issues of relevance and import to tribes. Consultation provides mechanisms by which tribes can have a voice in federal management of their interests.

The mechanism of consultation has its legal bases in treaties, statutes, executive orders and the ethical foundations embedded in the unique relationship between the United States and Indian tribes. Consultation, a formal process for communication with the tribes, should occur whenever it appears that tribes may have an interest in the outcome of an agency’s action, whether the tribal interest is direct or indirect.

Recent U.S. presidents have issued executive orders supporting consultation with Indian tribes. In 2000 President Clinton issued Executive Order 13175, Consultation and Coordination with Indian Tribal Governments, mandating all executive agencies to engage in meaningful consultation to ensure respect for tribal rights. He directed all federal agencies to “have an effective process to permit elected officials and other representatives of Indian tribal governments to provide meaningful and timely input in the development of regulatory policies on matters that significantly or uniquely affect their communities.”

In 2004 President Bush issued an Executive Memorandum recommitting to work with tribes on a government-to-government basis. In 2009 President Obama issued a Memorandum on Tribal Consultation announcing his administration’s commitment to carry out Executive Order 13175 and to conduct “regular and meaningful consultation and collaboration with tribal officials in policy decisions that have tribal implications….”

While most federal departments and major federal agencies now have consultation policies as mandated by three presidents, the U.S. Department of State does not. The State Department conducts relations with the government of Canada over matters of great importance to the four tribes, including the Pacific Salmon Treaty, a bilateral fish harvest and rebuilding agreement, and the Columbia River Treaty, a U.S.-Canada arrangement to optimize the river’s hydroelectric power production that is currently in pre-negotiations. The challenges the tribes face in the potential remaking of the Columbia River Treaty are discussed in the new institutional recommendation, Columbia River Treaty.

The U.S. State Department’s position is all the more puzzling in light of the Obama Administration’s 2010 endorsement of the United Nations Declaration on the Rights of Indigenous Peoples. The declaration’s emerging principles of international law cover government-to-government consultation, notably in Articles 19 and 32. Article 32 includes this provision:

States [i.e., countries] shall consult and cooperate in good faith with the indigenous peoples concerned through their own representative institutions in order to obtain their free and informed consent prior to the approval of any project affecting their lands or territories and other resources, particularly in connection with the development, utilization or exploitation of mineral, water or other resources.

Passed by the United Nations in 2007, the declaration will likely affect the United States in coming years as the world becomes increasing internationalized.

The unique and distinctive political relationship between the United States and Indian tribes is defined by treaties, statutes, executive orders, judicial decisions, and agreements and differentiates tribes from other entities that deal with, or are affected by, the federal government. This relationship has given rise to a special federal trust responsibility, involving the legal responsibilities and obligations of the United States toward Indian tribes and the application of fiduciary standards of due care with respect to Indian lands, tribal trust resources and the exercise of tribal rights.

Good words do not last long until they amount to something.

Good words do not last long until they amount to something. 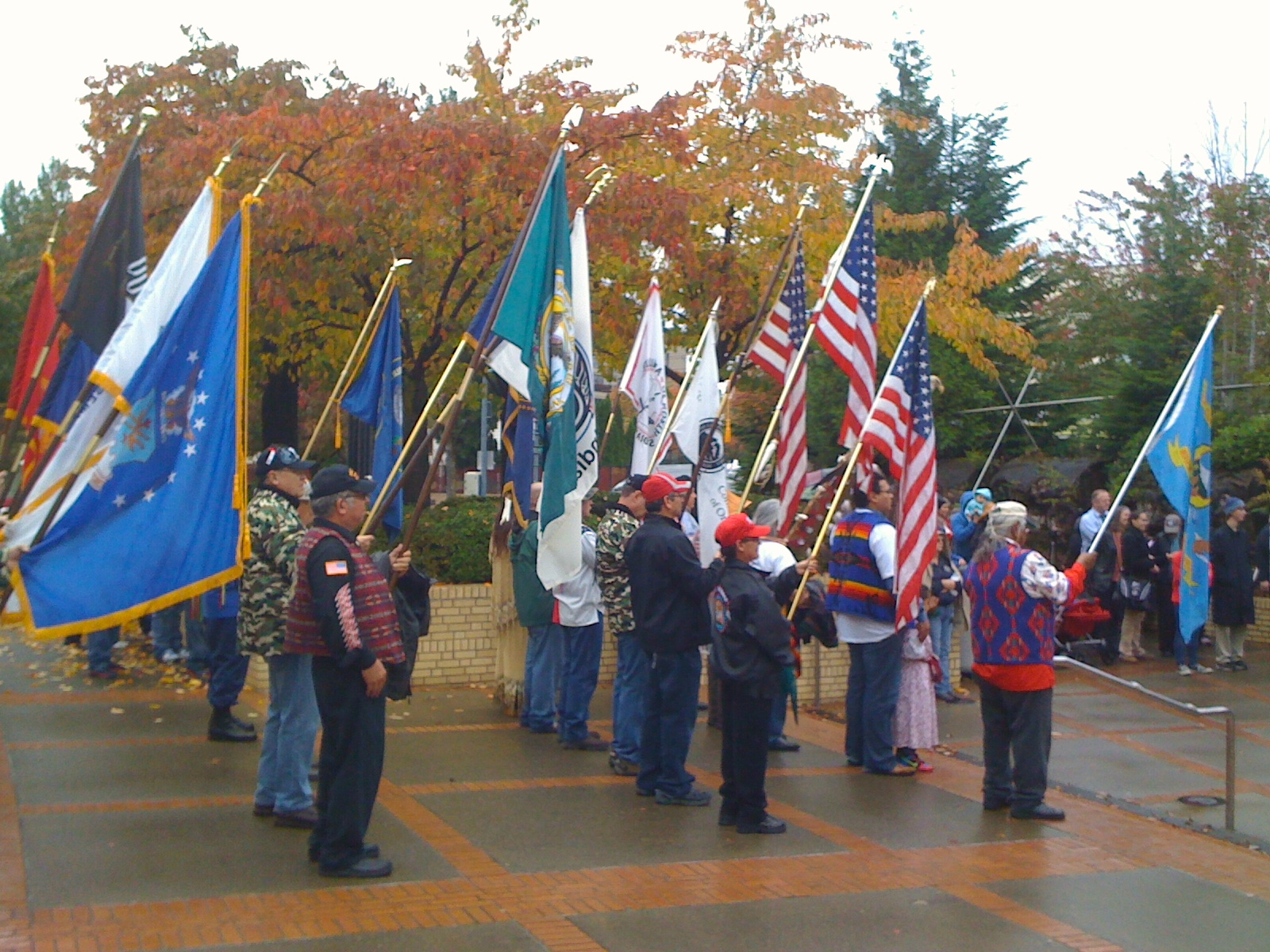 A color guard of many Columbia Basin and Pacific Northwest tribes present their nations’ flags along with the stars and stripes at an annual meeting of the National Congress of American Indians.

A color guard of many Columbia Basin and Pacific Northwest tribes present their nations’ flags along with the stars and stripes at an annual meeting of the National Congress of American Indians.