The Columbia River Basin encompasses nearly 260,000 square miles. The river drains most of Washington and Idaho, half of Oregon, Montana west of the Continental Divide, small portions of Wyoming, Utah, and Nevada, and 40,000 square miles of British Columbia. The 1,214-mile-long river begins at Columbia Lake, high in the Rocky Mountains of British Columbia, Canada. It initially flows northwest for 218 miles, then turns south for the next 280 miles. After crossing the United States-Canada border into northeastern Washington, the Columbia River flows south, west, and south again across central Washington in a broad curve commonly known as “Big Bend.” Just below the mouth of the Snake River, the Columbia turns west for its remaining 210 miles. It cuts through the heart of the Cascade Mountains, thus forming the Columbia River Gorge; flows into the Columbia River Estuary; and finally empties into the Pacific Ocean at Astoria, Oregon.

The Columbia’s largest tributary, the Snake River, begins in Wyoming, Utah, and Nevada and flows westward through the southern part of Idaho. It then turns north and forms the boundary of today’s Oregon and Idaho. Near Lewiston, Idaho, the Snake River turns west-ward and flows through eastern Washington until it enters the Columbia River near Pasco, Washington.

The land mass over which much of the Columbia River now flows did not exist until the Tertiary period (30-60 million years ago). Although the Columbia River Basin is relatively young in terms of geologic time, it comprises portions of eight physiographic provinces: Northern Rocky Mountains, Columbia Mountains/Okanogan Highlands, Cascade Mountains, Columbia Plateau/Columbia Basalt Plain, Snake River Plain, Blue Mountains, Willamette Lowland, and Coast Range. This rich variety of landforms has been determined by geology, past and present climate, and such processes as erosion and sedimentation.

Regional differences in climate and elevation have created a unique range of environmental conditions. For example, annual precipitation averages 10-20 inches in central Washington, eastern Oregon, and southern Idaho, and 40-140 inches between the Columbia River Gorge and the mouth of the Columbia River.

Periodic massive disturbances are an integral part of the natural environment that forms the basis for the ecology and evolution of anadromous fish in the Columbia River Basin. Natural events of large magnitude, such as the Mount St. Helens eruption which impacted steelhead runs on the Toutle River in Washington, have often occurred in localized regions.

Climatic cycles such as El Niño, which results in below-average snowpack and rainfall, are a part of the North Pacific region to which the salmon have adapted. The distribution pattern of warm and cold ocean currents and associated nutrient upwellings, which affect salmon production, are also cyclical in nature. Salmon populations (coho and tule fall chinook) which rear primarily south of Vancouver Island appear to have lower natural survival during El Niño events; whereas populations (bright fall chinook, upper Columbia summer chinook, and sockeye) that rear in the Gulf of Alaska seem to have better than average survival (PFMC 1985).

Numerous subbasins compose the Columbia River Basin east of the Cascade Range. Watersheds in these subbasins share many hydrologic features such as precipitation predominantly in the form of snow, relatively stable peak flows during spring as snow melts, and low flows during dry summers, punctuated by thunderstorms. The seasonal spring peak flows and summer low flows in this geographic region are a product of regional climate. Hydrologic features of streams in these watersheds result from the interaction of the seasonal precipitation with the soils, geology, vegetation, terrain, and other climatic features of the region. Streamflow characteristics are increasingly influenced by a combination of land and water uses, such as road building, vegetation conversions, and irrigation. Salmon have evolved races and life history characteristics to linked to dominant features of their habitats, such as streamflow and water temperature patterns. For example, chinook have adapted to high summer water temperatures, low summer flows, decreasing fall water temperatures, and increasing flows in producing spring, summer, and fall races with various life history features by adjusting upstream and downstream migration timing, rearing time spent in freshwater, size of streams used for spawning and rearing, and other features.

Salmonids and Pacific lamprey, similar to other anadromous species, have evolved with high spring flows as a mechanism to facilitate passage to the ocean for the adult phase of the life cycle. Although the frequency and magnitude of rainfall-dominated stream peak flows in any part of the Columbia River Basin is a function of the long-term climatic regime of that locale, their effects in stream channels (e.g., sediment loads, and frequency and intensity of channel scouring) vary according to topographic and geologic structure of the watersheds and channel morphology. Soils and topography also determine the inherent ability of a given watershed to provide stable, cool summer flows during the low-flow period.

The primary subbasins of interest to the Columbia River treaty tribes are those located upstream from Bonneville Dam. The tribes share management responsibilities in these basins with state and federal governments. These subbasins are shown in the adjacent Figure 3.3. (Subbasin descriptions provided in Appendix A are listed beginning at the point furthest downstream and proceed upstream in the order in which their major tributaries enter the Columbia, and then the Snake river mainstems.) The number of stream miles historically utilized by salmon species in each subbasin compared to the amount of habitat currently suitable for salmon species is provided in Table 3.2.

The Columbia River Estuary is a variable mixture of fresh and salt water and sediments at the coastal end of the Columbia River Basin. The estuary, which now has a surface area of approximately 41,200 hectares (101,750 acres), has been formed over geologic time by the forces of volcanism, glaciation, hydrology, and the erosion and deposition of sediments. Circulation of sediments and cycling of nutrients within the estuary are driven by river hydrology and coastal oceanography. Sea levels have risen since the late Pleistocene, with the result that coarse and fine sands have been deposited in submerged river channels.

Environmental variation in the ocean has always been a feature of the salmon life cycle. Salmon have been able to survive through these variations by natural compensatory survival mechanisms that act as a buffer (Foerster 1968). Increased stress in other aspects of the life cycle has reduced buffering capacity and the salmon’s ability to cope with environmental variation. Fluctuations in the ocean environment must be evaluated in order to understand the entire life cycle. Indices of ocean surface temperature, coastal upwelling, and weather patterns provide insight to changes in ocean productivity. Ocean growth patterns as recorded in salmon scales will provide biological measurements of the changes in ocean productivity. However, the best way to restore the buffering mechanisms and thus increase the probability of long-term survival of naturally reproducing populations is to reduce the stresses in the other stages of the life cycle.

Anadromous fish have developed a complex set of behaviors that are useful in adapting to change in the Columbia River Basin, as well as to the individual watershed conditions under which they have evolved. The salmon’s life history can be described as a series of biological functions (e.g., spawning, feeding, and migration) that are carried out in a series of temporally and geographically connected environments (Thompson 1959; Rothschild 1986). Within each of these physical environments, individual fish from a single population may exhibit different patterns of use of available habitat to express different biological functions, such as feeding, resting, and avoiding predators. A population may produce some fish which smolt in their first year and others which smolt in their second or even third year of life. Salmon parr may use both upper and lower portions of watersheds to rear prior to smolting. These kinds of life stage-habitat interactions are more fully discussed by RASP (1992b).

The anadromous life cycle and the strong tendency for homing to streams and rivers of origin have contributed to the evolution of numerous stocks of salmon (Groot and Margolis 1991).

The evolution of different life history types has occurred in response to differences in individual streams to which the animals have homed. Furthermore, salmon have the capacity to stray and thus colonize (or recolonize) new areas after disturbance. Thus, salmon have inherent resilience as a result of their anadromy, life span, and life history characteristics that help compensate for environmental fluctuations in freshwater habitats.

Such characteristics take advantage of spatial and seasonal variations in resource availability, lessen the risk that all populations would be extirpated by a single disturbance, or would react identically to the same set of environmental conditions (Reiman and McIntyre 1993). This has helped to buffer salmon populations against catastrophes (Steward 1993; Stearns 1976; Wootton 1990; Healey 1991). For example, large numbers of Toutle River fish strayed to other streams and fish migrations were delayed after the 1980 Mount St. Helens eruption (Martin et al. 1984). Subsequently, recovering vegetation helped to create the physical, chemical, and trophic base necessary for the recolonization of salmon stocks impacted by Mount St. Helens eruptions (Martin et al. 1986; Bisson et al. 1988). The behaviors which are important in colonization and recolonization are influenced substantially by habitat quality and quantity. For example, chinook introduced to New Zealand in 1905 from a single population in California have successfully colonized different river basins, and now exhibit differences in life history traits which could be the result of localized environmental factors.

Information about homing and straying behaviors is not available for Pacific lamprey (Beamish 1980). Because lamprey are a primitive species with fossil records dating back nearly 300 million years (Bardack and Zangerl 1968) and wide distribution throughout the northern hemisphere, they have no doubt been resilient to changing environmental conditions. 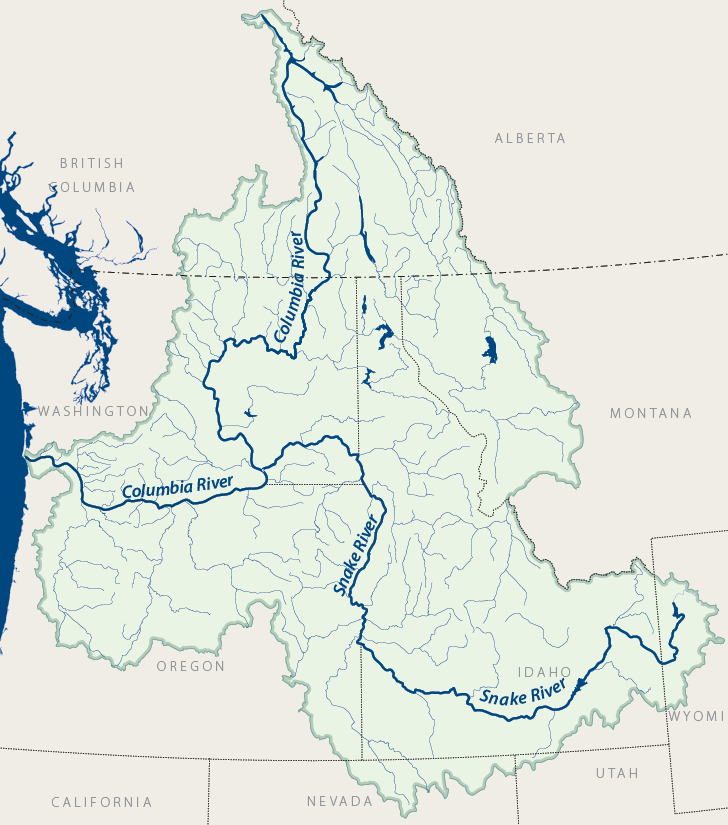 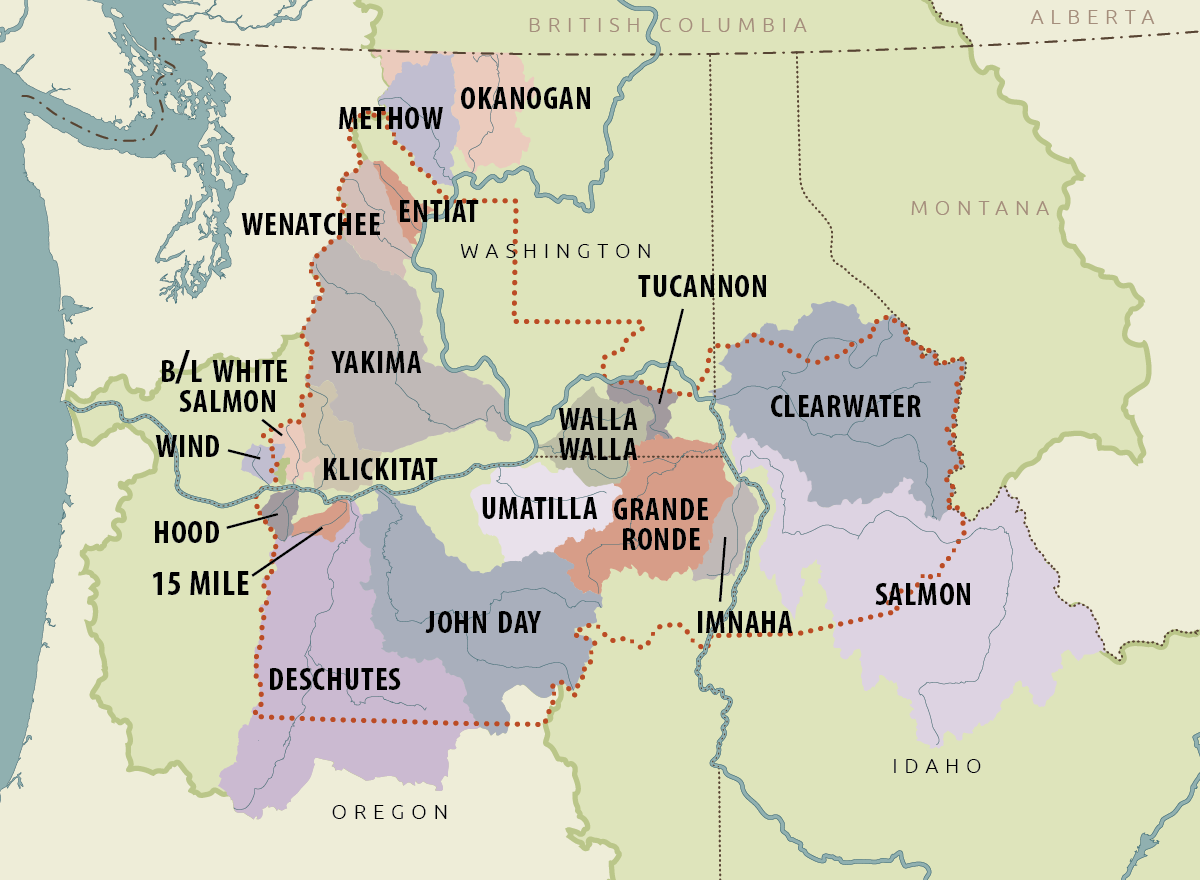 Figure 3.3. Major Columbia River subbasins in the United States above Bonneville Dam for which the four tribes have co-management responsibilities.

Read descriptions of these subbasins here»

Figure 3.3. Major Columbia River subbasins in the United States above Bonneville Dam for which the four tribes have co-management responsibilities.

Read descriptions of these subbasins here»

« Previous:Toward a Solution
Next: Anadromous Fish of the Columbia River Basin »
Back to Top