The construction and operation of mainstem hydroelectric dams continue to impair adult salmonid and lamprey migration to spawning locations in the Columbia River Basin. The dams have resulted in higher water temperatures unsuitable for salmon; hazardous passage through dams via fish ladders; fallback at fish ladder exits; and increased opportunities for salmon predators.

Recent survival rates indicate an improvement over those reported in the 1995 Plan. From 2009 through 2011, the survival of adult fish passing eight Federal Columbia River Power System (FCRPS) dams in the Columbia River Basin (Bonneville–Lower Granite dams) ranged as shown below. The FCRPS Biological Opinion (BiOp) targets, issued in compliance with Endangered Species Act, are shown in parentheses. These targets are to be met each year and are not averages. The rates do not account for increased predation on adults, particularly below Bonneville Dam.

The mid-Columbia dams (Wells, Rocky-Reach, Rock Island, Wanapum and Priest Rapids) are not included in the FCRPS BiOp; rather they are regulated by the FERC licensing process. The National Marine Fisheries Service (NMFS) biological opinions associated with these FERC licenses assumes no more that 2% adult passage mortality across the concrete of each dam. However, NMFS does not require these assumptions to be measured.

More information about adult fish passage and migration is provided in the 1995 Adult Salmon Passage recommendation and in the new technical recommendation Predation.

Operators of the Federal Columbia River Power System took actions related to recommendations in the 1995 Spirit of the Salmon Plan for cold-water flow augmentations from Dworshak Dam during the summer, fishway modifications to improve the upstream migration habitat for adult salmonids, and 24-hour fish counts to provide for more precise management data. They are briefly evaluated below, and several newer issues are described.

Water temperature: In the early 2000s, the region formalized a process which uses technical personnel from tribal, state and federal agencies—called the Technical Management Team (TMT)—to regulate the release of cold water at Dworshak to help assure that state water quality standards are met (i.e., to stay below 68 ° F). Through regional processes, salmon managers and agencies annually manage the reservoir between elevations 1600 and 1535 (65 feet) for release in July and August for flow augmentation and temperature control. In the 2004 Snake River Basin Adjudication, the Nez Perce Tribe reserved an additional 15 feet of drawdown (to as low as 1520), previously used in July/August, for release in September (or earlier if the tribe deems necessary).

Fishway modifications: Multiple fishway modifications have been added to FCRPS dams since 1995, improving adult passage. Adult attraction flows through fishways were increased at Ice Harbor, McNary and John Day dams. New serpentine sections were added to John Day Dam in 2004 to reduce adult leaping and injury in the upper sections of the ladder. Sea lion exclusion devices were added to the ladder entrances at Bonneville. (Sea lion predation is also addressed through hazing and other management actions.)

Fish counting: To improve fish counting, the hydraulics at count stations at John Day, Bonneville and The Dalles dams were improved reducing delay and milling of fish. In addition, PIT (passive integrated transponder) tag detectors are now at Bonneville, McNary, Lower Granite and Ice Harbor dams to allow for counting 24 hours a day. PIT tag counting allows for calculations on the effects of juvenile outmigration on adult returns (by route) and reservoir survivals for individual fish.

Fallback: Adult fallback has been reduced by changing project procedures at Bonneville to give priority to operating Powerhouse II, which moves downstream generation flow away from adult fish passage exits. At The Dalles Dam, the addition of a spill wall and changed spill patterns has decreased adult fall back (although this was a beneficial side effect of other efforts). McNary Dam still has large issues with fallback with winter steelhead because no safe fallback route is available during the non-spill season when these adults are present. Regional managers are trying to find a safer downstream route of passage to address this issue.

Kelt downstream passage: Currently, there is no regional strategy for downstream passage of Snake River and mid-Columbia kelts. The safest passage occurs through open surface routes, sluiceways and spillways during their outmigration, which usually starts in late February. Due to costs, many of these passageways are closed during parts of the season. The 2008 BiOp, which relies on kelt survival improvements, has allowed regional negotiations on improving and securing kelt passage at certain projects. CRITFC negotiated improved passage for kelts at Bonneville and The Dalles dams and is currently reviewing other critical locations.

Independent inspection and monitoring: After September 11, 2001, security measures have limited the ability for independent tribal monitoring at the dams.

Mid-Columbia passage: No significant adult passage improvements have been made since 2001 at the mid-Columbia PUD projects. Neither dam passage nor reach survival are monitored at these projects.

While the actions implemented since 1995 incrementally improved adult salmon passage survival rates, they did not meet the BiOps’ annual targets. Additional actions need to be implemented to meet BiOp targets. 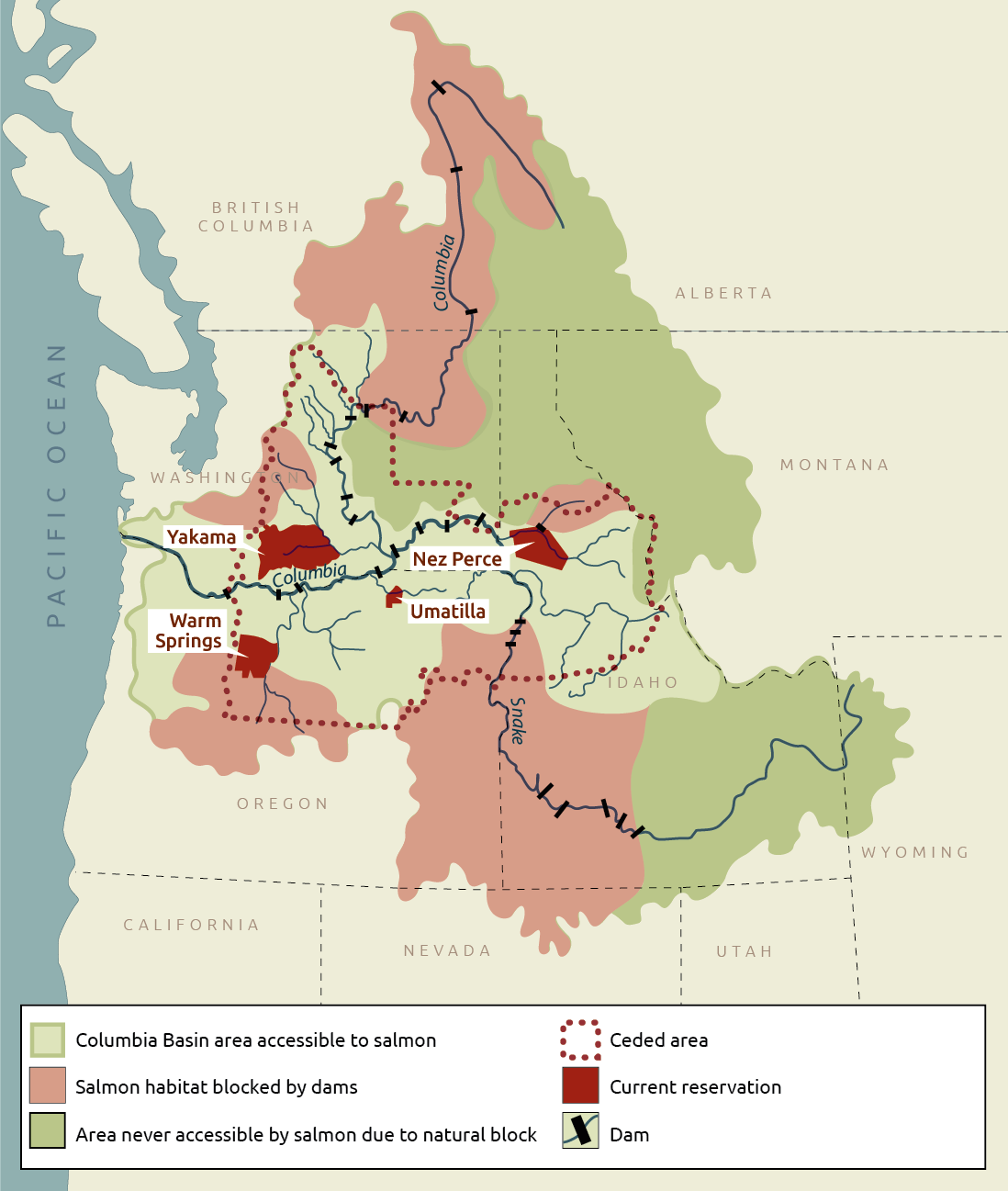 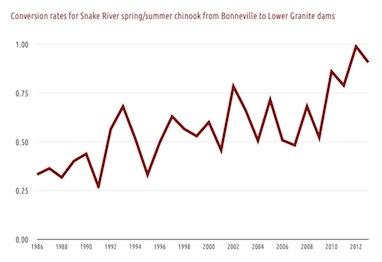 « Previous:Ocean Harvest
Next: Water Quality »
Back to Top